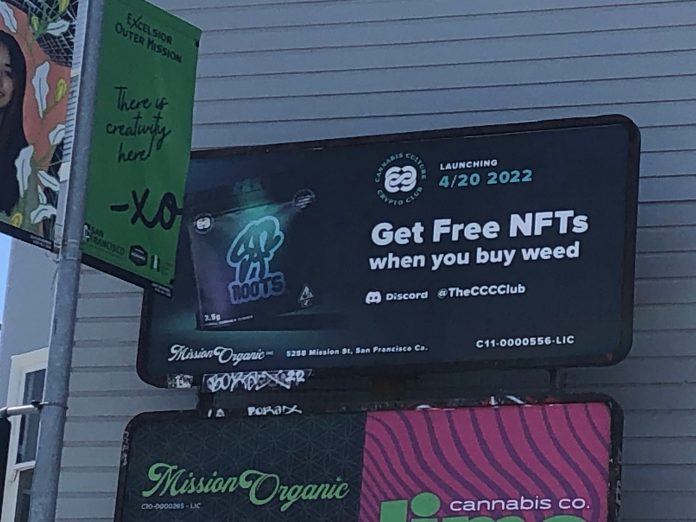 We have reached Peak 2022 San Francisco, as a fresh, new 4/20 billboard at Mission and Geneva Streets declares “Get Free NFTs when you buy weed.”

Holy smokes, the high holiday of 4/20 is now upon us. Here in SF, that means thousands of stoners are currently descending on Golden Gate Park for the first 4/20 at Hippie Hill since 2019, which is quite historic, because this will be the first 4/20 with legal cannabis sales in the park as dispensaries will be allowed to set up booths and do business.

But there are plenty of other non-Hippie Hill 4/20 celebrations blazing away too, so eager stoners are traditionally jam-packed in long lines all over town to stock up on their smoke. And as such, many dispensaries are getting as creative as possible with their discounts and promotions, as they compete for those sweet pothead dollars.

Which brings us to a fresh new billboard just installed at Mission and Geneva Streets. “Launching 4/20 2022,” the billboard declares, “Get Free NFTs when you buy weed.”

What the doob? Is this legitimate? To understand what is going on here, we must unpack the many things we see going on in this billboard.

There are many legal restrictions on cannabis advertising, which means fewer opportunities to place ads. This leads to many cannabis ads that have several different brand names appearing alongside one another, a joint effort, if you will, to maximize the limited ad space inventory available to them.

This billboard is no different. We see the name of the San Francisco dispensary Mission Organic (which is a block and a half up the street), the homegrown marijuana brand name SF Roots, and apparently some other collective called the Cannabis Culture Crypto Club.

That “club” does not list a website, nor does the billboard offer a QR code. But it does list a channel name on the messaging and chat service Discord, “@TheCCCClub.”

Welp, looking up that name on Discord gives us a “No Results Found” message — so it looks like they’re working at stoner speed to make this launch happen.

Same thing happens with or without the @ character the search. When we Google “@TheCCCClub,” our results show, sigh, a Twitter account for a “Breakfast & After School Club and Holiday Club” in Telegraph Hill, London.

There is a slightly differently named Crypto Cannabis Club, which per their own description, “Our goal is to provide the NFT owners in our community with the most exclusive cannabis experiences in the Metaverse and the real world.”  That club does do NFT promotions, which Forbes reports they call an “NFToker,” and admittedly, that’s pretty funny.

SFist has reached out to Mission Organic and the Crypto Cannabis Club to try and make sense of this, and we’ll update this post with any response. Admittedly, 4/20 is one of the busier days of the year in this racket, so we may not hear back immediately.

But we tried to hook up this blockchain free weed deal, and all we found were roadblocks.

Facebook
Twitter
Pinterest
WhatsApp
Previous articleTwitter Board Adopts ‘Poison Pill’ Strategy to Fend Off Elon Musk; Another Big Shareholder Also Just Upped Their Stake
Next articleElon Musk Says He Has the $46.5 Billion Lined Up to Buy Twitter Outright, But Investors Remain Skeptical of This Whole Deal