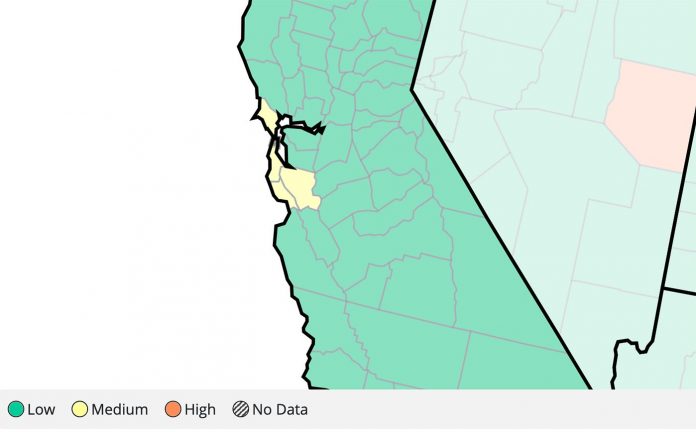 You may know someone with COVID right now, or you may have it yourself, as San Francisco is a couple of weeks into a surge being driven by the highly contagious BA.2 subvariant of Omicron.

We saw the surge happening by the third week in April, and its definitely here, with the daily case counts for San Francisco remaining well above 100. Cases may have peaked last weekend in the city, though it’s still unclear — official daily cases in the city hit 400 on April 25, and the numbers in the subsequent days were all over 300, but then in the first days of May they were down around 150-180. This is a far cry from the initial Omicron wave in January, as you can see in the chart below.

It’s highly probable that this surge will crest at a fraction of the cases we were seeing in SF and around the region during the winter, however the actual number of cases is likely some multiple higher than what’s being officially recorded by PCR testing labs. (Marin County has a self-reporting module for people testing positive on home tests, but SF isn’t bothering with that.)

And so many people were infected with the first Omicron variant that they are carrying hefty immunity to this subvariant.

Hospitalizations in San Francisco and around the Bay have ticked up slightly in recent days, but they remain relatively flat here and across the state.

Still, it’s a surge. As of Friday, San Francisco and three other Bay Area counties — Marin, San Mateo, and Santa Clara — are all back in the CDC’s yellow tier indicating “medium” levels of COVID transmission. Santa Cruz County is in the yellow tier as well. Meanwhile, the rest of California and much of the country is in the green or “low” tier.

The CDC has revived its tier criteria in the last month or so, and the yellow tier now indicates over 200 new cases per 100,000 residents in the span of a week. In San Francisco’s case, the number of daily cases has risen 40% in the last week being tallied — which may actually represent the picture of a week ago versus this week.

Map via the Centers for Disease Control

Deaths have remained very low in the Bay Area for the last two months, with high rates of vaccination preventing most cases from becoming very severe. But deaths have spiked at the national level in the last two days, bringing the U.S. death toll across the grim milestone of one million as of Wednesday.

Looking at the New York Times’ stats for COVID hospitalizations in California, the majority currently — as during other surges — are among elderly people.

Chart via the New York Times

UCSF’s Dr. Bob Wachter is exercising caution and masking up again as of this week, as he announced on Twitter, with so much virus again circulating in San Francisco.

But the majority of us are not being that cautious, so we’ll see how this goes.

Experts are meanwhile monitoring a new surge in South Africa driven by two other subvariants, BA.4 and BA.5, hoping for clues about what subsequent waves may look like in the U.S. and Europe.

“We are all tired of this virus, but [it] may not be tired of us. We need now to take seriously the decreasing immunity from previous infections,” says Tulio de Oliveira, director of South Africa’s Centre for Epidemic Response and Innovation, on Twitter.

Related: We Have Hit One Million COVID-19 Deaths In the United States