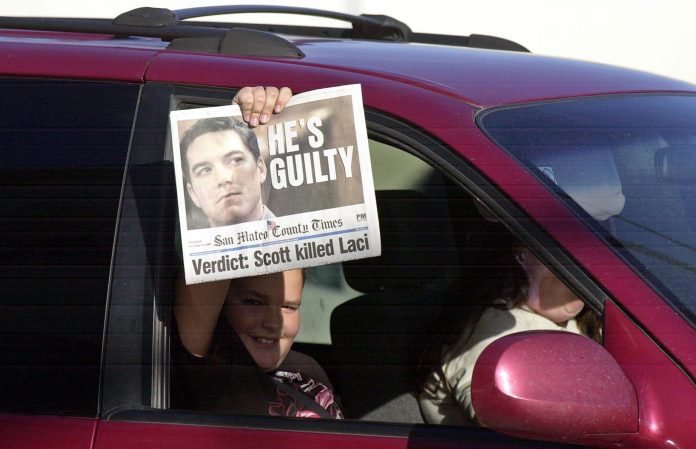 Scott Peterson, who has been back in a San Mateo County courtroom in recent weeks as his legal team continues trying to get his 2004 murder conviction overturned because of a single, allegedly biased juror, wants out of the county jail and back into San Quentin, and a judge is allowing it.

Why does Peterson want to be back at notoriously dangerous San Quentin, where he languished on Death Row for 17 years? Because apparently the phone rules at San Mateo County Jail are too onerous, and Peterson needs to be on a lot of calls with his lawyers in the coming weeks.

As Bay Area News Group reports, San Mateo County Superior Court Judge Anne-Christine Massullo granted a request Friday by Peterson’s attorney, Pat Harris, and Peterson will get to return to San Quentin prior to closing arguments in the current trial, which now will be delayed until June 29.

“This is an important time for you to have access to your client,” Massullo reportedly said to Harris at the end of today’s hearing. “He’s to be transported back to San Quentin.”

Harris said that Peterson will need to be on frequent Zoom calls with his lawyers, and at the county jail, he was only allowed to use the phone for 30 minutes a day during his his scheduled outside time. Things are apparently more flexible in state prison.

Peterson was relocated from San Quentin to San Mateo County in November, in preparation for this trial and in recognition of the fact that he no longer sentenced to death. Harris successfully got Peterson’s death sentence thrown out in 2020 by arguing that the trial judge in 2004 had not properly screened jurors for bias in favor of capital punishment.

Judge Massullo has delayed the final two days of this trial because of some surprise testimony from a documentary producer regarding juror Richelle Nice. Shareen Anderson, who produced the 2017 A&E documentary “The Murder of Laci Peterson,” told Peterson’s attorneys during a pre-trial prep session that she had discussed a possible post-trial book deal with Nice during Peterson’s 2004 trial, which would have been improper and would have amounted to a new impeachment of Nice as a juror.

Until now, Peterson’s team has just been arguing that Nice lied to the judge during jury selection about her experiences with domestic violence, having neglected to mention a restraining order she filed against the girlfriend of an ex-boyfriend of hers while she herself was pregnant. Nice testified last month that she had previously hit the ex-boyfriend, not the other way around, and that the restraining order was taken out in self-defense, so therefore she did not consider herself a victim of any crime, and she was truthful in her juror questionnaire 19 years ago.

But Peterson’s lawyers have been trying to find other ways to prove bias on the part of Nice, including letters that she wrote to Peterson in prison after the trial, and references she made during deliberations and in those letters to “Little Man” as a nickname for Scott and Laci Peterson’s unborn son, who was also considered a murder victim in the case. Anderson says that when she interviewed Nice for the documentary, she saw a photograph on a wall of a small child in a onesie that said “Little Man” on it — something that Peterson’s lawyers say is further proof that this was personal for Nice, and she was biased.

All of this is crazy-making and a huge waste of everyone’s time because it’s just shady legal maneuvering to somehow discredit the fact that 11 other jurors also found Peterson guilty of murder. And there is an abundance of evidence, albeit largely circumstantial, to point the finger at Peterson for killing his wife — not the least of which were lies he told to a mistress he was courting, Amber Frye, who also testified against him and says she would do so again if he has to be tried again.

Anderson has retracted her statement about Nice discussing the book deal, saying her memory is fuzzy and the discussion might have happened after the trial. Also, at the last minute, she refused to testify after her lawyer said she learned of California’s protections for journalists — and that the information about Nice was gleaned while doing work as a journalist.

As the Associated Press reports, Judge Massullo has granted the delay for closing arguments in light of this new “evidence.” Stanislaus County prosecutors and Peterson’s lawyers will have to submit their written arguments by May 25 and reply briefs by June 9, with oral arguments on June 29.

Laci Peterson and her dead fetus washed ashore in San Francisco Bay in April 2003, after she went missing on Christmas Eve 2002. Scott Peterson told neighbors and police different stories about his whereabouts that day, telling some that he had been golfing and others that he had gone fishing in San Francisco Bay. A hair identified as Laci’s was found in Peterson’s fishing boat — a boat that prosecutors say Laci did not even know her husband had bought, and that she had never been in.

Peterson would later be arrested in San Diego, after the discovery of the body, his hair died blond and his car packed as though he were planning to head across the border to Mexico.

But yes, he would like a new trial, please.