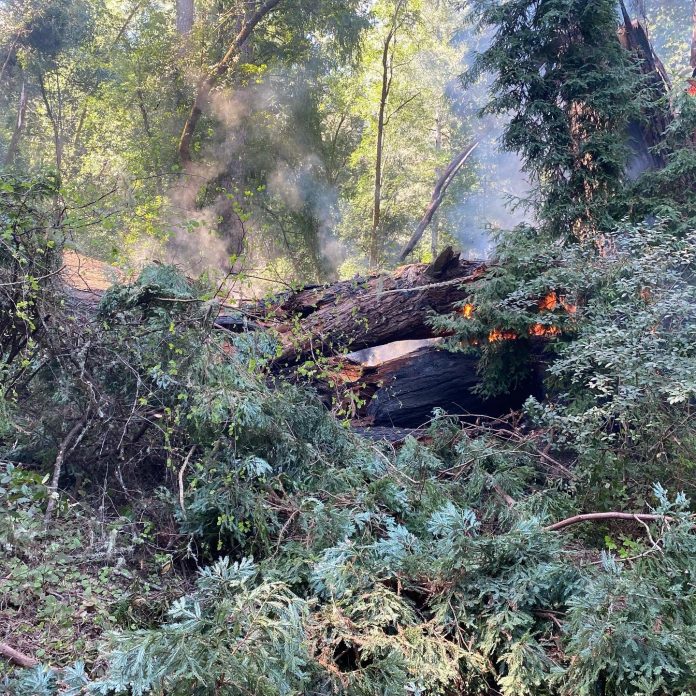 The Pioneer Tree, standing 200 feet tall, was one of the few remaining old growth coastal redwoods in Samuel P. Taylor State Park. The Mercury News reports that the tree was estimated to 500 years old, and may have been intentionally spared by loggers in the 1800s.

The tragedy happened quickly. California State Parks says a fire was first reported around 11:25 a.m. Thursday by an off-duty state parks officer. Shortly after, the Marin Municipal Water District caught video of flames reaching the center of the tree, where other fires had hollowed it out through the years.

Here’s video of the Pioneer Tree shot by the Marin Municipal Water District earlier today before the tree collapsed. pic.twitter.com/YIqI33MCfV

Parks officials explain that younger generations of redwoods had nourished the Pioneer Tree’s root systems to keep it standing, but those saw sparks too. As fire came to fully engulf the redwood in the afternoon, it toppled.

“State Parks is devastated by the loss of this much beloved redwood tree,” said California State Parks Director Armando Quintero. “I saw the collapsed tree in person and know how much it pains all of us who treasure these ancient giants who have lived thousands of years.”

State Parks says the cause of the fire is under investigation and so far is unknown. At last update, the fire reached about half an acre (21,780 square feet) and was not at risk of spreading further than that.

“The good news is that no evacuations at the park were needed, no campers were impacted, and no one was injured,” State Parks said in a news release.

The Pioneer Tree and Cross Marin Trails within Samuel P. Taylor State Park are both closed for the time being, but the rest of the park is still open.

“State Parks thanks the public for their patience and understanding during this developing incident,” the agency said.

There are several easy-to-moderate trails, some of which are wheelchair accessible or even partially paved.

Day use parking at Samuel P. Taylor State Park is $8, and standard campsites are $35.

Facebook
Twitter
Pinterest
WhatsApp
Previous articleMandelman Reintroduces Shelter-for-All Proposal at Board of Supervisors, Hopes to Get It to a Vote This Time
Next articleScott Peterson Transferred Back to San Quentin So He Can Make More Phone Calls to Lawyers