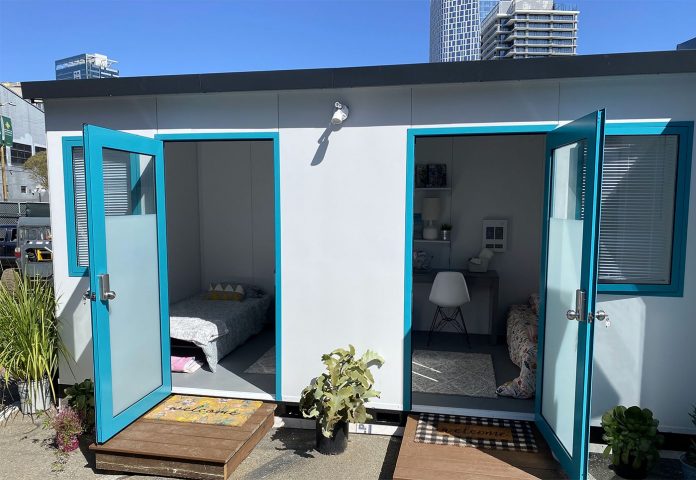 Mandelman Reintroduces Shelter-for-All Proposal at Board of Supervisors, Hopes to Get It to a Vote This Time

Supervisor Rafael Mandelman is reviving, for a second time, proposed legislation that would require the city of San Francisco to provide shelter to anyone who needs it — something that has been established law in New York City for decades. But will this just mean a whole lot more sanctioned tent-village sites?

First introduced in October 2020, and later debated and shot down in April 2021, Mandelman’s revised “A Place for All” legislation is intended to push the Department of Homelessness and Supportive Housing (DHSH) to create more shelter options and implement a plan to provide shelter — or a safe-sleeping tent site — to anyone who wants it. The revised proposal is getting introduced at Tuesday’s Board of Supervisors meeting, and Mandelman says he already has the support of three other supervisors.

“San Franciscans are frustrated, and rightly so, that after multiple decades and many billions of dollars spent to ‘solve homelessness’, thousands of unhoused people continue to sleep on the streets night after night,” said Mandelman in a statement. “For all the money we spend and have spent, it’s reasonable to expect clear improvement in the situation on the streets, and frankly people are not seeing that.”

The costs associated with the proposal remain unclear. And given the revelation last year that each tent in SF’s limited Safe Sleeping Village program was costing the city $60,000 per year — or more than a market-rate two-bedroom might cost to rent — an expansion of that program is likely to see continued pushback. The “Place for All” ordinance would require DHSH to prepare an implementation plan within three months, and that would include estimating how many homeless people would be willing to accept low-barrier shelter if it was offered, and then estimate what the costs would be based on that number.

Mandelman says the revised proposal includes a push for more indoor shelter options.  And the ordinance would require the Director of Real Estate “to conduct a survey of real property to identify lots or facilities appropriate for use as shelters, tiny home communities, or safe sleeping site.”

“If we’re going to address the problem of encampments in our neighborhoods, we need to be able to offer people a place to go, not in some ideal future, but tonight,” Mandelman said in a statement to the Chronicle. “We may get to the point where we have housing for all, but … I believe we do have a realistic path to get shelter for all.”

But, debate is likely to center on how money is being spent on the homelessness issue, and whether spending more money on temporary fixes — especially tents — makes any sense when building more permanent supportive housing is what’s needed.

And another point of debate will be whether individuals’ civil rights could be violated if the city begins coercing people into housing or threatening them with citations or arrest. As the Chronicle notes, a federal ruling in recent years pertaining to homeless people camping in public spaces in Boise, Idaho says that it’s illegal for a city to arrest someone for being homeless and camping somewhere if the city can’t provide an adequate alternative. But once those alternatives exist, will the police do more criminalizing of homelessness and encampments?

“Street sleeping doesn’t make someone safe, sane, or sober,” says Mark Nagel, co-founder of RescueSF, which is trying to organize small business owners to push for compassionate solutions to homelessness. “Conditions in our neighborhoods are significantly worse today than ever before. Our city leaders need to commit to shelter all who want a roof over their heads as a first step on the path out of homelessness.”

Supervisor Matt Haney, who’s currently campaigning to be the next Assemblymember for San Francisco, is reportedly backing Mandelman’s revised legislation, though last year he opposed it. One main reason for his opposition was the continued use of tent villages, calling them a “failed approach” to the shelter problem.

Mary Kate Bacalao, director of external affairs and policy at Compass Family Services and co-chair of the Homeless Emergency Service Providers Association, spoke to the Chronicle last year when Mandelman introduced his “Place for All” legislation for the second time. “It’s undeniable that everyone deserves a safe place to sleep,” Bacalao said. “But what’s important to acknowledge is that we can’t shelter our way out of homelessness. If we create this massive expansion in shelter that isn’t part of an overall comprehensive vision that wants to lift people out of poverty and get people inside and put them in housing, we’re creating problems over the long term.”

Supervisor Myrna Melgar, who’s supporting the new legislation, tells the Chronicle this week, “We have been in this typical San Francisco debate of whether our approach should be housing first or shelter, as if we can’t do both. I am tired of the crisis on our streets, and if I’m tired, what about the poor people who are on the street?”