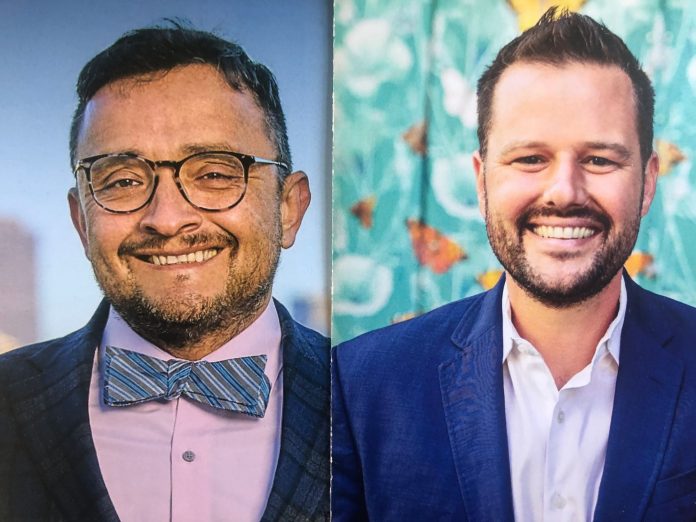 Campos Draws Groans, Backlash for Saying His Campaign Is ‘Fighting and Running Like Ukrainians’ in Assembly Race

A hamfisted comparison by David Campos that his campaign was “fighting and running like Ukrainians” in his state Assembly race against Matt Haney is getting eyerolls and disapproval, right as early voting kicks off.

Today, March 21, is the first day you can vote by mail (or at City Hall) in the AD-17 race for state Assembly between Matt Haney and David Campos, after the two finished just 726 votes apart in the primary vote for the upcoming April 19 election. And thus far in the campaign, neither has really landed an effective punch, nor has either had a significant misstep.

That may have changed Saturday afternoon, when what seems like a real gaffe by Campos went viral on Twitter. In a video that as of Monday morning has more than 33,000 views, Campos said at an event, describing his campaign, that “There is some, you know, connection to Ukraine. Because we are, you know, fighting and running like Ukrainians. We are up against the odds. Right?”

⁦.@DavidCamposSF⁩ comparing his fight to beat ⁦@MattHaneySF⁩ for an assembly seat in Sacramento to the Ukrainians fighting Putin is possibly the most absurd thing to come out of his mouth — and that says a lot. pic.twitter.com/m7CAX8NdV0

Some posts of the video describe it as “Source: Anonymous,” but the first version of the video broke on Saturday afternoon at 12:49 p.m. on the Marina Times Twitter account.

Campos acknowledged the remark and the video’s authenticity in comments to the Chronicle. “That is not to trivialize or to compare anything happening in my campaign to what’s happening (in Ukraine), and I think that anyone who’s saying that is simply, you know, distorting the comment,”  Campos told the Chron, saying his remarks “had to do with what it’s like to be an underdog.”

“My family and I fled a civil war in Guatemala, twice,” he added on Twitter. “But I know that all struggles against oligarchs, against democracy, and against injustice are united.”

My family and I fled a civil war in Guatemala, twice. But I know that all struggles against oligarchs, against democracy, and against injustice are united. I have been fighting for underdogs my whole life – and winning. Matt Haney has the billionaires on his side.

But this was just easy, low-laying fruit for Matt Haney to go after. “Ukrainians are currently being killed by the thousands and are fighting for their lives. David Campos drawing a parallel between his campaign and their heroism and sacrifice is offensive,” Haney said in a statement to the SF Standard.

Because of the very odd special election and primary calendar, the April 19 special election for the seat is possibly the second of four times in one year these two will run against one another for the same seat. If it’s close again, and if one of them loses by only 1,000-ish votes, there will be an obvious temptation for the loser to run again. The AD-17 map will be different for the June 7 primary election, so whoever finishes behind will be tempted to take another run at it again with a slightly different electorate in November.

Suffice to say that even if both run against each other again in June and November, we will probably not hear another Ukraine remark from David Campos. But we may hear more from Haney about Campos’ “offensive ” Ukraine remark, and because of that, Campos’ Saturday slip may reverberate for months, in multiple successive campaigns for the same seat.

Facebook
Twitter
Pinterest
WhatsApp
Previous articleFormer SF Supervisor Jane Kim Hit With Ethics Complaint Over Lobbying Against Controversial SoMa High Rise
Next articleMandelman Reintroduces Shelter-for-All Proposal at Board of Supervisors, Hopes to Get It to a Vote This Time