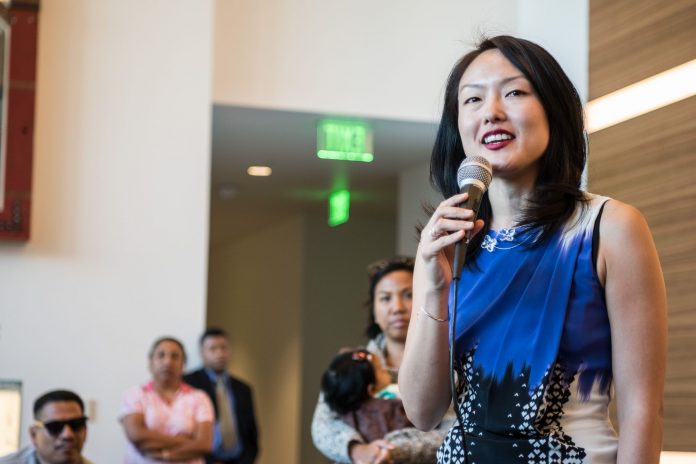 That 27-story residential tower slated for a Nordstom’s parking lot, which the supervisors shot down last October, has now generated a complaint with the SF Ethics Commission that the district’s former supervisor Jane Kim improperly lobbied against it.

When the San Francisco Board of Supervisors rejected a plan last October to build a 27-story residential high-rise in what is currently a Nordstrom’s parking lot on Stevenson Street near Sixth Street, there was immediate speculation that the vote was some sort of “payback” against the district’s supervisor Matt Haney. Haney had just weeks before declared he was running against former supervisor David Campos for a California state Assembly seat, and six supervisors who’d voted against the project had already endorsed Campos.

“This is at least partly about punishing Matt Haney for running against Campos,” SF State political science professor Jason McDaniel told the Chronicle at the time. “They see it as a betrayal.”

Tonight the Board voted down a 495 unit housing project in my district on a parking lot on Stevenson/6th.
It was approximately 24% affordable with 100+ affordable units, near transit, w ground floor community space, & extensive neighborhood support from residents & leaders.

But maybe it was a different former supervisor gaming that vote. The SF Standard reports that a YIMBY-affiliated activist has filed an ethics complaint against District 6’s former supervisor Jane Kim for paid lobbying against the project, an alleged violation of local laws barring former public officials from lobbying on projects they’d worked on while in office. Kim has been a paid organizer for TODCO, an affordable housing developer that opposed the Stevenson Street project.

“I think it’s a clear pipeline from public power to improper use of knowledge and influence that violates the law to lobby against the project,” YIMBY Law board member Steven Buss, who filed the complaint, told the SF Standard.

The ethics investigation of @JaneKim follows a complaint filed by a board member of pro-housing group @yimbylaw.

It’s the latest volley in a war over the proposed apartment building on the site of a Nordstrom’s parking lot at 469 Stevenson St. in SoMa.https://t.co/P3cKzfS2XV

There are certainly receipts tying Kim to TODCO. The Standard reports that Kim called TODCO president John Elberling “10 to 15 times to discuss efforts to halt the apartment project,” and that Kim “sent materials to members of the Board of Supervisors that were prepared by a TODCO affiliate and which argued that the project needed to be stopped.” There are call logs and calendar invites linking Kim to paid opposition of the project, and she’s done paid work for political advocacy groups to whom TODCO has donated.

That said, none of this is explicit proof that Kim broke any laws. I could file an Ethics Commission complaint against a ham sandwich, but that doesn’t mean the sandwich did anything illegal. And while the Ethics Commission says in a letter that their “Enforcement and Legal Affairs decision has opened an investigation” into the matter, these things often fizzle out with no wrongdoing found.

And that the complaint was filed by one of the many YIMBY-affiliated groups’ premier trolls smacks as San Francisco housing politics as usual. That a lobbying group is complaining about someone else’s lobbying certainly has a Spiderman-pointing-at-Spiderman-dot-gif kind of feel to it.

Happy to help hold powerful people accountable when they break the law https://t.co/flK5p7B4sE

But some of Kim’s defenses simply do not pass the smell test. While she acknowledges doing paid work for TODCO, the report notes that “Kim told The Standard that her work in opposition to the project was done on her own time.” Which… come on, that is an implausible-sounding defense to those of us who do not work in politics. Kim also played a seemingly irrelevant race card, telling the Standard that “I’m offended that, as an Asian American woman, an older white man can tell her how to think.”

Kim then turned the argument against the website itself, and she kind of has a point here: The SF Standard is a new publication funded largely by venture capitalist Michael Moritz, who has donated $40,000 to YIMBY Action, which shares board members with YIMBY Law. The Standard says “Kim compared her and Elberling’s situation to that of The Standard and Michael Moritz,” without quoting her directly, and she’s indicating that if Moritz can keep an ethical arm’s-length between himself and the publication, then she can do the same with her own work. But there’s a shrewd shiv there in pointing out that the SF Standard is bought and paid for by a Silicon Valley YIMBY guy, which is literally true.

Still, the main issue here is not the SF Standard, it’s Jane Kim’s alleged lobbying. And there is certainly some “there” there with regards to paid conflicts of interest. It may all technically be legal, but it’s yet another side issue to a high-rise development that lost at City Hall, but now seeks to win through lawsuits and legal complaints.

Facebook
Twitter
Pinterest
WhatsApp
Previous articleTwo Pandemic Years Later, Gay Bathhouse Zoning Back on the Docket In SF
Next articleCampos Draws Groans, Backlash for Saying His Campaign Is ‘Fighting and Running Like Ukrainians’ in Assembly Race