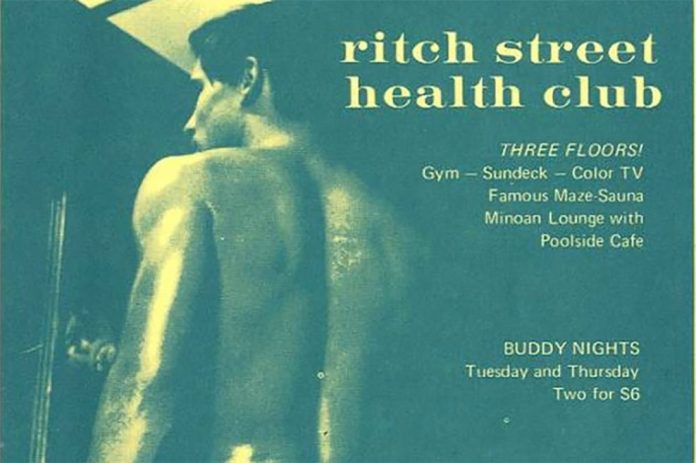 Two Pandemic Years Later, Gay Bathhouse Zoning Back on the Docket In SF

Way back in February 2020, SF Supervisor Rafael Mandelman introduced legislation that would re-legalize the bathhouses that the city had banned at the start of an earlier pandemic, the AIDS pandemic. And now he’s proposing creating a new zoning category for them.

It was 1984. Dianne Feinstein was mayor. And AIDS had already begun ravaging the gay community in San Francisco. Under political pressure to do so, Feinstein and her administration ordered the closure of the city’s bathhouses — which had once numbered in the dozens in and around SoMa and the Tenderloin. These were saunas and sex clubs where often newly liberated gay men would go to spend an evening, or make a final stop after a night of drinking or dancing — and historians say that SF’s pioneering leather culture was dealt a death blow when the bathhouses closed.

Even at the time, there was no public-health consensus about whether bathhouses needed to be closed, but it had become increasingly clear to city officials that the city’s growing HIV epidemic had at least something to do with the free-love and libertine sexual activities going on in the local community, and the bathhouses were one nexus of this.

In 2020, Mandelman proposed a repeal of the local ordinance that made bathhouses — which were defined specifically as communal baths or clubs which had rentable private rooms with lockable doors — illegal.

“Our current regulations for adult sex venues were put in place as an emergency measure at the height of the AIDS crisis when San Francisco was desperate to slow the spread of HIV/AIDS,” Mandelman said at the time. “Decades later, with the emergence of PrEP and in light of San Francisco’s reduction in HIV diagnoses to under 200 for the first time since the 1980s, these regulations — including a ban on private rooms and required monitoring of patrons’ sexual activities — have no public health rationale and need to be changed.”

By July 2020, the Board of Supervisors had passed the new legislation, with Mandelman celebrating by telling the Bay Area Reporter, “In the midst of the current COVID-19 pandemic, we are reminded that our best public policy decisions will be driven by data, science, and facts, not by panic or political pressure.”

But, when the law took effect last year, at least one new bathhouse got new pushback from the city Planning Department. As SF Bay reports, it came to light that bathhouses were no longer a permitted category of business under the city zoning code for adult businesses, and/or some neighborhoods are no longer zoned for them. So, now we need more new legislation.

On Tuesday, Mandelman introduced legislation that would create the new zoning category for adult sex venues, making them permissible in the historically LGBTQ neighborhoods of the Tenderloin, South of Market, Upper Market, and Castro.

“During the 1970s and early 80s, bathhouses were a focal point of gay social life in San Francisco and were important community meeting places where friends would gather to share stories, or watch a live show,” Mandelman said in a statement. “This ordinance is about completing the work we began in 2020 to overcome the lingering stigma of a painful chapter in the history of San Francisco’s queer community by once again welcoming these safe, LGBTQ-affirming spaces in our city, and paving the way for queer entrepreneurs to open them up and contribute to our post-pandemic economic recovery.”

San Francisco hasn’t had a proper adult bathhouse within its city limits in nearly 40 years, though it has had places like Eros — the Castro sex club and “spa” without private rooms that shuttered last year with announced plans to relocate somewhere closer to downtown. But it sounds like Eros was the canary in the proverbial coal mine with this issue, discovering the zoning problem when it ultimately landed on a new location.

“After 30 years, Eros spent over six months searching for a new location where our legacy business could continue to offer a safe, relaxing sex club. …When we did find a location, in a historic bath house just one block from the Market Street corridor, where the landlords were interested in our business, the location didn’t allow adult businesses,” says Eros SF co-owner Ken Rowe, speaking to SF Bay. “These zoning changes can keep our business going and offer more variety of safe experiences for tourists and locals.”

Before the zoning change can go before the full Board of Supes, it needs to first wend its way through Planning approvals, and then go before the Board’s Land Use and Transportation Committee. So, hopefully, sometime later this year, Eros will be able reopen somewhere, and maybe some other bathhouse entrepreneurs will jump into the mix as well.