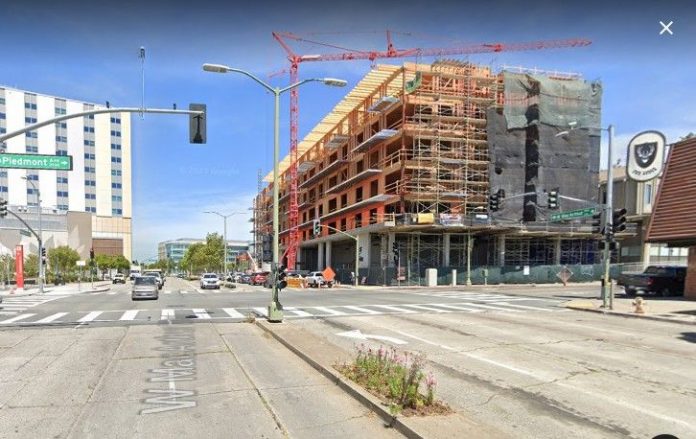 A 35-year-old San Francisco man was killed in a hit-and-run at about 4 p.m. Thursday afternoon, and an Oakland woman is in custody on suspicion of vehicular manslaughter with gross negligence.

An Oakland woman is in custody after a suspected hit-and-run late Thursday afternoon, which took the life of a San Francisco man who was crossing Piedmont Avenue at West MacArthur Boulevard on foot, in the area of the Kaiser facilities there and near several popular restaurants.

KTVU reports that Oakland police have arrested a suspect in the hit-and-run, 31-year-old woman Danniqua Tims of Oakland. Tims was heading westbound on West MacArthur Boulevard. The victim was transported to a hospital, but died there.

According to KTVU, Oakland police allege that Tims “had been speeding at the time and has prior convictions for DUI and drug possession.”

As Bay Area News Group reports, Tims was driving a 2016 Chrysler, and while she initially failed to stop, she was arrested just a few blocks away. Oakland police have said that speed was a factor in the crash, but that drugs and alcohol don’t appear to have been involved.

A subsequent Friday morning update from KTVU’s Henry Lee adds that Tims has been arrested on suspicion of a hit-and-run, and suspicion of vehicular manslaughter with gross negligence.

The identity of the victim, a 35-year-old San Francisco man, has not yet been released. We will update this post if that information becomes available.

Anyone with further information on the crash is asked to call police traffic investigators at 510-777-8570.

Facebook
Twitter
Pinterest
WhatsApp
Previous articleOuter Sunset Meth Dealer Busted, Seven Pounds of Drugs Seized
Next articleIt Will Always Be More Profitable/Clickable to Shit On San Francisco, So People Will Always Do It