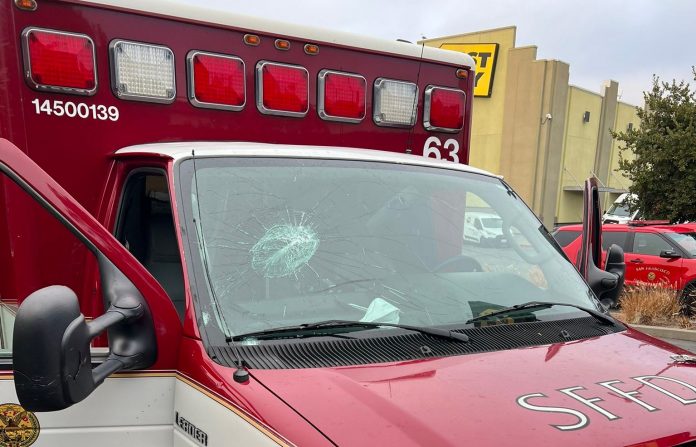 Two San Francisco Fire Department paramedics say they were attacked this morning by a crazed individual at the edge of the Mission District near Division Street, first with the man smashing the windshield of the ambulance with a wooden stake.

The incident occurred at 6:55 a.m. Monday, according to a tweet from SFFD spokesperson Lt. Jonathan Baxter, and another tweet from the firefighters’ union.

The attacker allegedly wielded a wooden stake, the type used to hold young trees upright, and approached the SFFD ambulance where it was parked on the 1700 block of Harrison Street, near Best Buy.

The Chronicle got further elaboration from Baxter, who explained that this was a non-provoked attack, and the individual came up to the ambulance and smashed the windshield and other windows in the vehicle, which prompted the two EMTs to get out of the vehicle.

In jumping out, one of them reportedly dropped the keys, which the suspect then picked up. He then allegedly got into the ambulance, and took a brief joyride, first chasing the paramedics and then driving into the Best Buy parking lot and doing a few circles there.

A fire department pickup truck responding to a call for backup apparently prompted the suspect to stop, jump out of the ambulance, and flee the scene over a fence. He has not yet been apprehended.

Baxter only described him as a Latino male in his 40s wearing a black jacket and brown pants, and he tells the Chronicle that the two paramedics had no previous contact with the suspect.

“This was a violent attack on our ambulance and the members inside with a deadly weapon,” Baxter said in a statement. “This non-provoked attack could have led to the death of our paramedics.”

“This morning two of our members were attacked by someone who used a stake from a tree, smashing windows and trying to assault them,” the union said in a statement. “This is another ambulance out of service and two personnel who are rightfully, shaken up.  This behavior in our City is not acceptable.”

The union noted in the same thread that the firefighters’ union hall was “broken into and ransacked” last week, and while the suspect was immediately arrested by police, there was “th0usands of dollars of damage” done to the facility.

The Chronicle notes that the SFFD has 54 ambulances, which cost around $300,000 apiece. These vehicles are posted on corners throughout the city while not on active duty, and are not attached to specific fire stations.