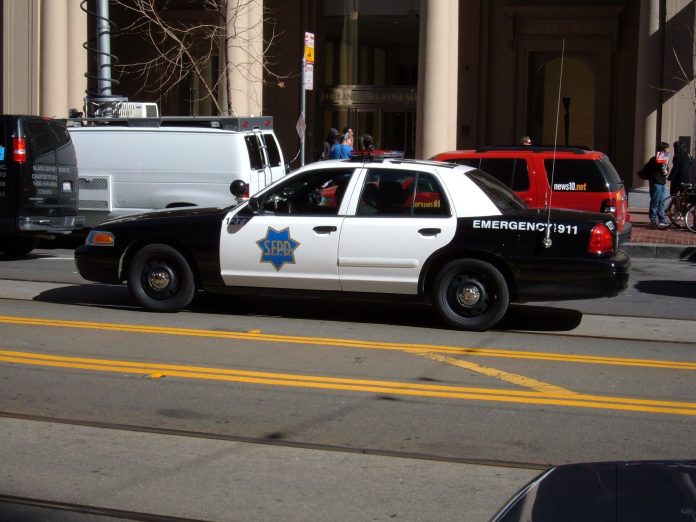 Chesa Boudin gets to charge one more SFPD officer on his way out! One SF cop who once had a GoFundMe so he could stay unvaccinated now faces multiple fraud charges involving a pricey Ford Mustang, which ended up getting totaled.

San Francisco District Attorney Chesa B0udin is far more aggressive at prosecuting police misconduct than any of his modern predecessors, which may be part of what got him recalled earlier this month. But even in his post-recall interregnum, Boudin will be giving one more cop criminal charges.

On Monday afternoon, the SFPD sent out a press release announcing the arrest of Officer Adam Eatia, for vaguely described allegations of “an incident involving fraud related to a vehicle.” The release additionally alleges that “Eatia also made fraudulent representations to his insurance company when applying for and making insurance claims for the vehicle,” and that “Eatia impersonated an SFPD sergeant on the application for insurance.”

But this thing gets a lot wilder with more detail from Boudin’s office, and a little bit of background on 15-year veteran SFPD Officer Adam Eatia.

According to a release from Boudin’s office, sent about two hours after the SFPD announcement, all of the charges are related to the strange saga of a 2018 Ford Mustang (the model is seen above). Eatia “will be charged with five felony counts including one count of grand theft by false pretenses, two counts of insurance fraud, one count of forgery, and one count of identity theft,” over allegedly bilking multiple parties out of insurance money over at least two car accident incidents.

Officer Adam Eatia, a 15-year veteran of the department, surrendered himself to authorities after a warrant was issued for his arrest. Eatia is the fourth SFPD officer who has been arrested this year alone.https://t.co/9WRJsDp7iG

In the spring of 2018 (the model would have been brand new), another unnamed officer allegedly “helped Officer Eatia purchase the vehicle and insured it [in] his name through Mercury Insurance. Officer Eatia was not disclosed as a driver anywhere on the application.”

That would become crucial, because Eatia would promptly get the car into an accident just months after obtaining it. He “committed insurance fraud by failing to disclose he was the primary driver,” according to Boudin’s office, and still pocketed “over $6,000 in claims relating to this accident.”

The SFPD just sent a press release alleging that one of their own, Officer Adam Eatia, was arrested for a strange alleged scam. But wait, there's more…he's also an admitted anti-vaxxer and there's something interesting going on with PPP loans. A mini thread: pic.twitter.com/OFSPqyBTk8

Our SFist co-founder and current Berkeleyside editor Eve Batey took the liberty of Googling Eatia’s name, and some things stand out. The SFPD describes Adam Eatia as a “15-year veteran of the SFPD.” And Google search results also show a GoFundMe called “Helping Adam get through a rough patch,” initiated in October 2021. That GoFundMe bemoans that an SFPD officer named Adam Eatia was “going through disability for an injury that occurred at work” and “he exhausted his sick pay.”

But later in the GoFundMe, we see that “Along with all that, he faces termination for the vaccine mandate.”  This was posted at a time when around 40 SFPD officers were on leave over the refusal to get vaccinated.

And that GoFundMe leaves out a key detail! According to the SFPD release, Eatia was already under internal affairs investigation for fraud at the time. He was “disarmed and transferred in September of 2021 to an assignment with non-public contact” — a month before the GoFundMe went up.

Ofc. Adam Eatia of @SFPD held on suspicion of grand theft,insurance fraud, ID theft & forgery for falsely claiming a car damaged in off-duty ‘19 crash wasn’t insured so he could take $ from victim as compensation, per @SFPDChief, adding he also impersonated sgt. on insurance app pic.twitter.com/Epso86atCm

And that’s not even the craziest shit here. According to the DA, Eatia bought another insurance policy in March 2019, unbeknownst to the other officer who signed the first policy, with Eatia allegedly forging that other officer’s name/signature to get the new policy?

More trouble: Eatia then allegedly lent the Mustang to a friend, who also got it into an accident and completely totaled the thing.

According to Boudin’s office, “Officer Eatia is alleged to have committed grand theft when, after the accident, he lied to his friend – telling him that the vehicle was not insured and demanded that the friend pay him $49,000 for the damage. After accepting this payment, Officer Eatia also filed a claim with Allstate under the vehicle owner’s name. Through this claim, Allstate paid out more than $36,000 for the vehicle — resulting in an almost double recovery of funds for Officer Eatia.”

Eatia surrendered to arrest on Friday and is now free after posting $40,000 bail. He’ll be arraigned in late July, and there will likely be another Breed-appointed DA in place by that time to handle the prosecution.

Related: Report: SFPD Refused to Participate in Quickly Burglary Ring Bust, Boudin Had to Rent His Own U-Haul [SFist]