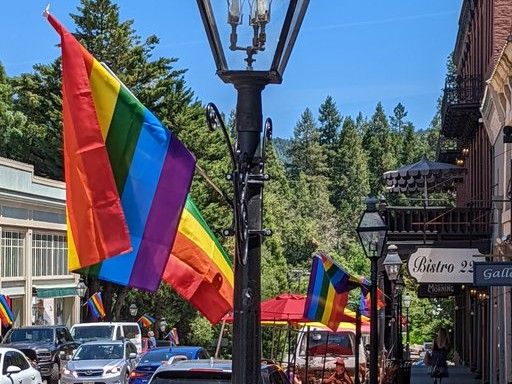 An inaugural Pride celebration in a small town roughly 150 miles northeast of SF would have been this past Saturday, but didn’t happen after Nevada City’s negative response to the Pride flags set off some red flags.

San Francisco is rolling into Pride Weekend with the return of the traditional in-person parade. And while events resembling the modern Pride celebrations have been happening here for more than 50 years, it’s a relatively new development that we’re seeing Pride celebrations in small rural towns all over America.

One of these is shown above in Nevada City, California, which is right by Grass Valley and some 150 miles northeast of San Francisco. Nevada County newspaper The Union reported that Pride flags were installed for June along the city’s main drag of York Street, and a small Pride Dance Party was scheduled  for this past weekend. Though when he flags went up, The Union ominously noted that “On Wednesday, the majority of the calls fielded at the Nevada City Chamber of Commerce office were to complain about the LGBTQ+ flags.”

It makes me sad & angry that the beautiful Pride flags decorating the streets of Nevada City CA have mostly been stolen.

And in the wake of disturbing events like the Proud Boy storming of Drag Queen Story Hour in San Lorenzo, and the attempted attack by white nationalists in Idaho, KRON4 reports that Nevada City has decided to cancel its Pride event.

“With the rising number of attacks on Pride events across the nation, it became clear we couldn’t ensure the safety of participants, particularly with a street event with no entry, no exit, where anyone can come and go,” the event’s organizer and Nevada City councilperson Damiela Fernandez told The Union. She adds in the Instagram post above that “I have received hate mail regarding the Pride Flags in town, many of you have reached out to express concern about the flags being vandalized and removed, and to share images of heinous skin-crawling homophobic signs showing up in town.”

She also notes a lingering concern over “the events of August 9, 2020,” an apparent reference to a Black Lives Matter rally disrupted by counter-protesters, which turned violent as it only had four police officers present. (For some perspective on the culture-war crisis that’s been ongoing in Nevada City for several years, see this Chronicle piece from September 2020 by area resident Rachel Howard.)

So the Nevada City Pride Dance Party, much like this year’s Pink Saturday “Touch of Pink” event in the Castro, is no longer on for 2022, and forced back to the drawing board in hopes of a more detailed  security plan for 2023.