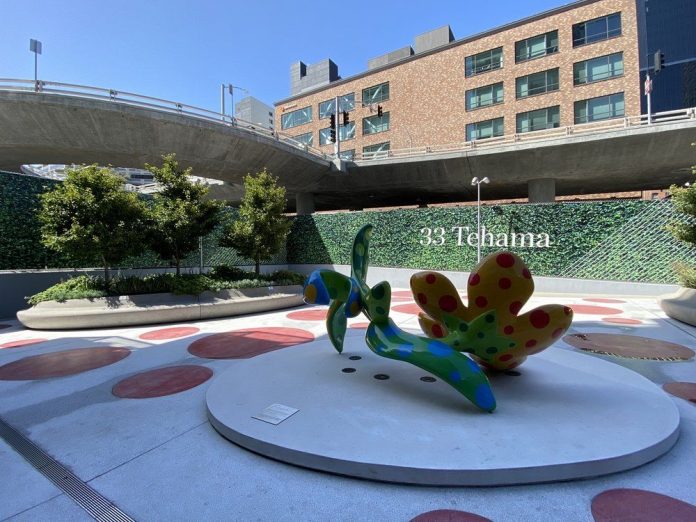 Tenants at the swanky 33 Tehama apartment complex will not be able to go home for at least the rest of the week, as a roof-level pipe burst flooded every floor below and forced the evacuation of all of the building’s 383 leased units.

It was rough weekend for the tenants of a four-year-old luxury apartment complex on Tehama Street near First Street, as the Chronicle reports a bursting water pipe on the roof forced the evacuation of all 383 occupied units at the building. The burst apparently occurred shortly before 3:30 p.m. Friday afternoon, and after engineers, water experts, and PG&E couldn’t halt the flow, residents were evacuated over water electrical dangers, and they have no timeline for when they can return.

“The elevators are broken beyond repair and the fire marshal won’t let anyone return,’’ resident Austin Caldwell told the Chronicle. (Per the Chron, Caldwell and his partner pay $3,330 for a one-bedroom at the complex). All of the tenants are being put up in Union Square hotels, which is great and all, and the Chronicle reports they’ve been told “their hotel reservations had been extended until Friday,” which is the diplomatic way of saying they can’t go home all week.

Above we see the building in question, 33 Tehama (far right, with the lighting details). It opened in 2018, and per the property’s website, it’s described as “a defining new residence with a collection of modern apartments and penthouses that bring truly cosmopolitan living, sophisticated design, and unrivaled amenities in an incredible SoMa location.”

The San Francisco Fire Department incident report, per the Chron, says that a six-inch pipe burst in an apartment on the 36th floor of the building Friday afternoon. But there is no 36th floor, and residents say the burst happened on the roof. This checks with Yelp photos, which indicate that the 35th floor has a rooftop lounge, and therefore is top floor accessible to residents — but the SFFD also could have gotten the floor wrong.

Preliminary reports to me expressed appreciation to members of the @SFFDPIO and @SFFFLocal798 for their response, but concerns re: @pge for theirs. (Thank you, @ChiefSffd Nicholson, for your responsiveness to me on this!)

The district’s new supervisor Matt Dorsey tweeted Sunday that he’d “finished an on-site check-in,” but mostly tooted a horn of praise for the fire department. When the Chronicle asked Dorsey for comment on the situation, he merely said, “I don’t have my arms around it.”

The property firm that manages 33 Tehama said in a Sunday night statement, “At this time, a team is working diligently to fix the problem and restore safety systems and utilities.” And, the firm added, “We will be conducting an extensive investigation to determine the cause of the water leak at the property.”

Tenants were at least allowed to collect their pets (but can they keep their pets in the Union Square hotels?). So things are settled for now in the sense that everyone is safe and relocated, but it wouldn’t be shocking if their return to their apartments was delayed further. Moreover, there will likely be disputes over tenants’ damaged property and possessions, and the flooding of 33 Tehama may be more than a one-week story.

In fact, moments ago the Chronicle reported that the Department of Building Inspection is now sending inspectors “to determine if there is water damage or other code issues,” and “whether any building-code violations occurred.”