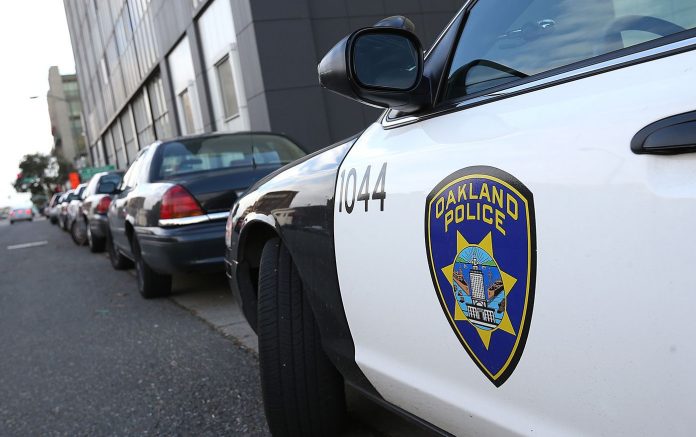 New allegations are emerging from an Oakland Police Department source regarding a deadly Sunday morning crash in East Oakland that may have been spawned by an unsanctioned high-speed chase by rookie officers — who then allegedly fled the scene without calling for medical help.

The crash occurred around 1:50 a.m. Sunday on the 5400 block of International Boulevard. A Nissan 350Z that speeding eastbound on International crashed into some parked cars, sending one of them onto a sidewalk where 28-year-old Lolomanaia Soakai and three other men were standing near a taco truck. The vehicle struck the men, killing Soakai and injuring the other three, and Bay Area News Group reported from an Oakland Police press conference Monday that the Nissan had allegedly been involved in a sideshow nearby. The official word from Oakland Police Chief LeRonne Armstrong was that two officers had been in pursuit of the Nissan but “disengaged” from the chase after the Nissan began speeding up to 100 miles per hour.

First responders ultimately freed 19-year-old Arnold Azael Linaldi of Oakland from the crashed vehicle, and he was arrested on suspicion of vehicular manslaughter and other charges.

As KTVU is reporting via a source close to the OPD, the two officers in question were rookies on the force, and they’re now being investigated not only for engaging in a so-called “ghost stop” — a rogue chase of a suspect that is not sanctioned by department policy because of the danger to the public — but the officers may have also witnessed the crash and left the scene without summoning medical help.

According to the source, the officers didn’t initially put their siren and lights on during the chase, but when they did, this automatically triggered their body-worn cameras to turn on — something they may not have been aware of. The cameras, allegedly, show the officers at the scene, and one of the officers may have even said something to the effect of “I hope they die,” referring to the driver and/or passengers of the Nissan.

“According to the second source, the officers eventually ended up returning to the scene, showing up to help as if they had no knowledge about what caused the chain of deadly events,” reports KTVU.

A video posted to Instagram shows the police SUV in pursuit of the Nissan, and the aftermath shortly thereafter. It includes the hashtag “#fuckyourpolicedepartment.”

While the Oakland Police Department has been trying to get tougher on sideshow activity, the phenomenon spans both sides of the Bay, occurs throughout the warmer months of the year, and it can be hard to control or curtail when there are a massive number of cars and pedestrians involved. Arrests are not frequent, though cars are sometimes impounded.

Oakland has, as of a recently, a special sideshow intervention unit, but Armstrong said they were not involved in this incident.

Chief Armstrong is reportedly pissed about the situation, and is moving to terminate the two officers. Currently, they are on administrative leave, pending an internal affairs investigation.

Armstrong responded to questions from KTVU saying only that he “relieved the officers of police powers, as these very serious allegations are being investigated.”

Rinaldi was arraigned on Tuesday, and had been being held on $75,000 bail.

In his official statement on Monday, Armstrong said, “Anytime you have a collision that leads to someone’s death, like we have in this event, and you have some information and evidence that shows that your police cars may have been in the vicinity or have made contact with that vehicle, we want to thoroughly investigate our involvement. [We want to] make sure our officers are following policy, following laws and if they were in compliance with department’s expectations… [including]  speed and permission to be involved.”

Armstrong also expressed culpability for those who take part in sideshows, saying, “It’s not just police officers that need to be held accountable, as those that come in and and be involved in this unlawful activity that also need to be held accountable, because we can’t continue to accept this because it’s leading to tragic outcomes for families.”

A GoFundMe has been set up to raise funeral funds for Soakai’s mother. According to that page, Soakai was employed by Envoy Air, a regional carrier that is a subsidiary of American Airlines.