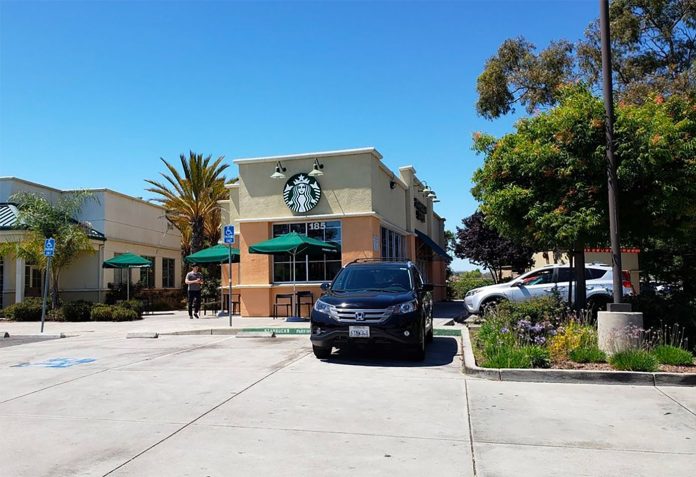 Don’t stop for coffee on your way to or from Oakland Airport with a car full of luggage, because opportunistic thieves may just smash in and grab it all.

It’s a new tactic, at least to us, but it’s a similar strategy to skulking around tourist-magnet areas like Alamo Square Park, the twisty part of Lombard Street, and Fisherman’s Wharf. A victim of a smash-and-grab theft in Oakland tells ABC 7 that a group of suspects targeted her family’s car with a clear M.O. — taking their luggage.

Victim Hulya Yalcin tells the station that she was driving her sister and niece to Oakland Airport recently when they pulled in to grab coffee at the Starbucks near the airport, on 98th Avenue. Yalcin describes how man immediately approached the car and looked through the windshield — she thought he was going to offer the wash the windshield — and then took a big sip of a water in his hand. This was apparently a signal that summoned an SUV with four other individuals in it.

“Four people! All covered face! Then they broke the window and took all the baggage inside,” Yalcin tells ABC7.

There were apparently warning signs outside the Starbucks about break-ins and not leaving valuables in cars. But this has apparently been happening often — there were 29 larcenies reported in the area of this Starbucks just in the last four weeks, per ABC 7, and a total of 223 in that location so far this year.

Clearly that Starbucks is a target, and thieves have been successful preying on luggage-packed cars.

Yalcin says her sister immediately called the police after the smash-and-grab, but no officers ever showed up. This story has been echoed in San Francisco in recent years, with the extreme frequency of these crimes — minus those months in 2020 when there were no tourists, and the thieves turned to home break-ins instead.

Facebook
Twitter
Pinterest
WhatsApp
Previous articleFish Are Falling From the Sky In SF, and Clumsy Pelicans Are Likely to Blame
Next articleSource: Two Rookie Oakland Cops Engaged Sideshow Car In Chase That Ended In a Pedestrian Death