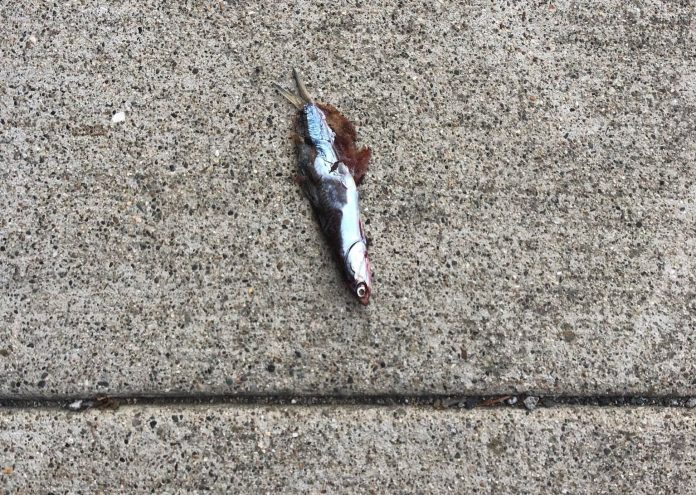 Fish Are Falling From the Sky In SF, and Clumsy Pelicans Are Likely to Blame

A seasonal boom in the anchovy population on the San Francisco coast and in the Bay is causing some heavy traffic among feasting seabirds, and this is apparently leading to fish seeming to fall out of the sky in the city and elsewhere.

Stories about fish falling from the sky bubble up on social media on the regular, but it’s never anything cool like the Biblical plague of frogs in Magnolia. The culprit: birds.

SFGate picked up a local thread from Reddit about some anchovies falling from the sky onto someone’s house in the Outer Richmond about three weeks ago. The post garnered plenty of comments such as, “I saw this happen over at the Fort Point parking lot a few years ago: one or two dozen 8-inch silver fish rained down like splat splat splat!” and “I saw like 3 or 4 little fish this evening, maybe 4” long max, on the path near the boathouse at Stow Lake,” and “Almost got hit by a fish waiting for a bus in Castro. Came out of a tree… Like a 4 inch sardine, partially chewed on.”

Yes, it seems the pelicans and other seabirds have more anchovies to feast on than they can handle right now, and this may lead to you finding random fish on the pavement as they fly overhead, perhaps traversing from the ocean to the Bay with a mouthful.

Adam Ratner, who is the associate director of conservation education at the Marine Mammal Center in Sausalito, explains to SFGate that the “upwelling” of cold, deep-sea water is bringing more anchovies to the surface, and many fishermen and around the Bay have been taking notice. “The water temperatures right now do appear to be colder than normal, and this has provided some much-needed food for animals such as anchovies, seabirds and marine mammals,” Ratner says, adding that while this could be a phenomenon linked to climate change, for now it is providing a lot of extra food whales, sea lions, and, of course, the birds.

Cold temperatures and plenty of anchovies are a sign, at least temporarily, of a very healthy ocean, so that’s good.

In related news, State Bird Provisions off-shoot The Anchovy Bar is still going strong over in the Fillmore, and it’s delicious! Fresh or lightly pickled anchovies are nothing like they’re overly cured and salted cousins you find in cans. Below, a brief video made a couple of years ago about the “anchovy protocol” in the kitchen at State Bird and The Progress next door, and how it gave birth to The Anchovy Bar.