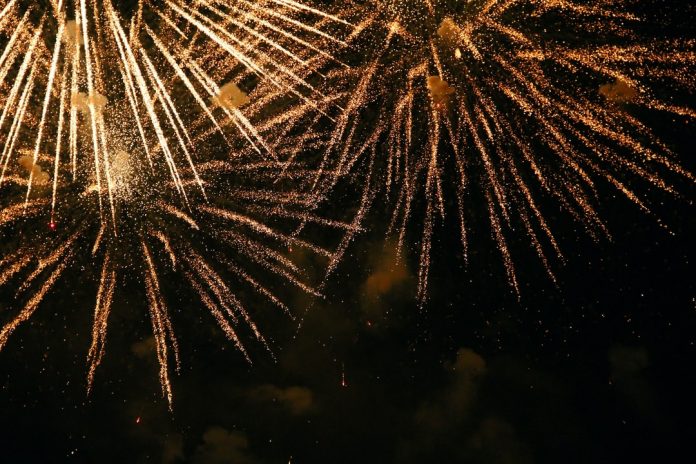 Cal Fire has put out its annual warning, but in this particularly drought-parched year, conditions are ripe for wildfires caused by illegal fireworks over the Fourth of July weekend.

The Fourth falls on a Monday this year, which means the fireworks should start going off Thursday in neighborhoods across San Francisco, and not let up until about Tuesday morning.

Elsewhere in the state, illegal and even “safe and sane” fireworks have the potential to set vegetation on fire, with much of the state still in an extraordinary drought — and there are five significant fires already burning across California, including the 769-acre Rices Fire in Nevada County, which just began on Tuesday.

“Fire conditions are elevated, and the 4th of July, along with the use of fireworks, only increases the risk for wildfires,” said Cal Fire Director and Fire Chief Joe Tyler in a news release. “It is critical that Californians be vigilant and consider leaving the fireworks to the professionals.”

“The fuel, the brush, and the grass is all very dry and receptive,” says Cal Fire Battalion Chief Jon Heggie, speaking to the Chronicle. “So what may be good intentions of setting fireworks in celebration could have devastating effects.”

Heggie says that many fires are accidentally started every year by illegal fireworks, but this year things could get especially bad, if the conditions and location are particularly fire-prone.

Most fireworks are illegal in California, and Cal Fire says it is working with state, local, and federal law enforcement on task forces this weekend to crack down on illegal fireworks shows. Those caught could face fines up to $50,000.

In the vast majority of Bay Area cities and towns, any and all fireworks are illegal, and discharging them can lead to fines — even though actual enforcement of the law is near impossible in cities like San Francisco and Oakland which just become free-for-alls with amateur fireworks shows throughout the holiday weekend.

As NBC Bay Area reports, Oakland police already made an arrest last week following a tip about someone selling illegal fireworks in East Oakland, seizing 100 pounds of fireworks and $38,000 in cash.

Facebook
Twitter
Pinterest
WhatsApp
Previous articleState Considers Propping Up Diablo Canyon Nuclear Plant With $75 Million Boost — Straight to PG&E
Next articleFish Are Falling From the Sky In SF, and Clumsy Pelicans Are Likely to Blame