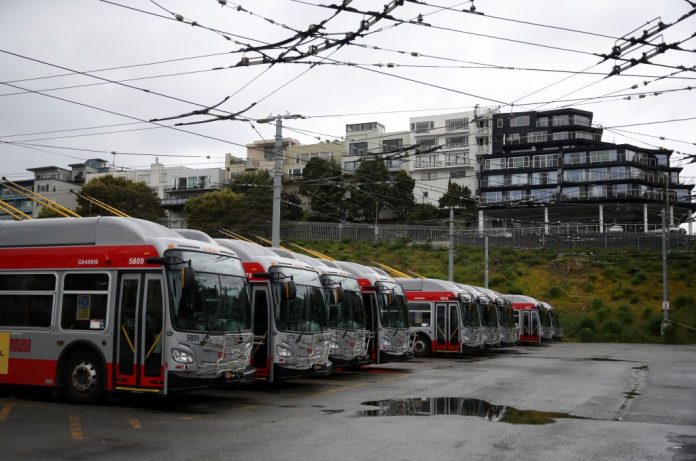 San Francisco police blocked off an area near Lombard and Fillmore streets Saturday after a vehicle going, per eye-witness accounts, between “60mph to 80mph” collided with a Muni bus — hitting it with such force that the public transport vehicle made a 180-degree twist.

In a tweet from the San Francisco Emergency Services Department, people were encouraged yesterday afternoon to stay clear of the area of Lombard and Fillmore Streets due to police activity present at the time of a vehicle collision involving multiple vehicles, including a Muni bus. The crash, which was reported around 11:03 a.m. Saturday, left at least six individuals with non-life-threatening injuries who were all taken to a nearby hospital for treatment; the driver behind the wheel of the large white SUV was detained by on-site police.

ALERTSF: Avoid the area of Lombard and Fillmore Streets due to Police Activity. Emergency crews are on scene.

According to KRON4, multiple firefighters and emergency medical personnel were treating injured parties on the ground. Eric Kingsbury, an eye-witness to the collision, noted to the news outlet that he had just crossed Lombard Street with his girlfriend when the couple heard an impact so loud that “multiple crunches” could be detected.

Bad crash at Lombard & Fillmore in San Francisco earlier today. A witness says the SUV came speeding down Lombard and hit the Muni 22 bus which was traveling down Fillmore. Police say everyone is okay and there were non life-threatening injuries @kron4news pic.twitter.com/LAWJqqbk1X

Multiple pedestrians, as well as bus riders, were injured in the collision; Kingsbury says he saw one little girl “with lacerations on her face who was shaking and couldn’t speak.” He also told KRON4 that there was another girl with red streaks in her hair… which he didn’t “realize until later were from the blood.”

Another witness, Jaime Schilling, told the news outlet that the white SUV came barreling down the street, speeding through a red light, and “was going 60-80 mph, blaring his horn and weaving through traffic” before it careened over the median and into the oncoming traffic lanes.

“It was less than 10 seconds later that we heard the collision,” Schilling noted.

The suspect’s name has yet to be released; the current condition of those injured by the collision remains unknown at the time of publishing.