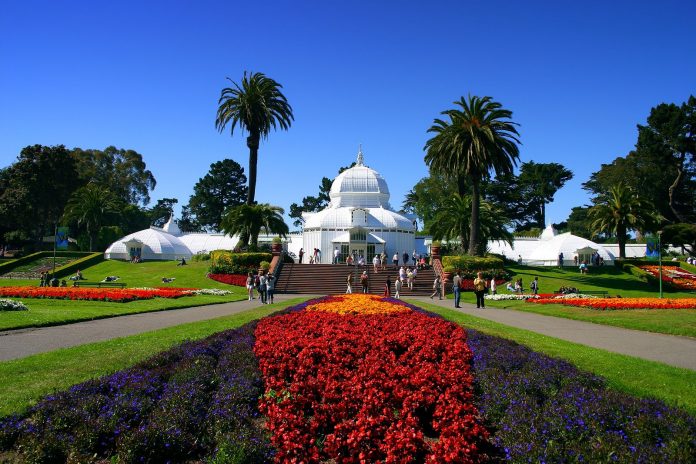 The Conservatory of Flowers and Japanese Tea Garden are now officially free for all San Francisco residents, though this will be offset by slightly higher prices for out-of-towners.

At the Tuesday, March 8 SF Board of Supervisors meeting, the supes voted 10-1 to make Golden Gate Park’s Conservatory of Flowers and Japanese Tea Garden free for all SF residents. But the law did not go into effect that day. In the odd odyssey of how a bill becomes a law in San Francisco, even when the supervisors approve something, it still has to go back for the mayor’s signature, and the law does not take effect until a full 30 days after the mayor signs it.

Flower power people, that 30th day is today. As of today, free admission for San Francisco residents at the Conservatory of Flowers and Japanese Tea Garden goes into effect.

Today the Gardens of Golden Gate Park become free for San Francisco residents as well as all veterans regardless of residence. Get out to the gardens & celebrate #EarthDay!
🌍https://t.co/ukdbqCjkfN
📸:
Saxon Holt
Kelly Mason
Asamudra pic.twitter.com/x7h5KFhwLA

“On Friday, legislation will go into effect making the Gardens of Golden Gate Park free for San Francisco residents as well as all veterans regardless of residence,” SF Rec and Parks said in a press release. “The ordinance, introduced by Mayor London Breed and co-sponsored by Supervisor Gordan Mar, removes resident admission at the Conservatory of Flowers and Japanese Tea Garden for all San Francisco residents.”

“The San Francisco Botanical Garden is already free to San Franciscans,” the release adds. “The ordinance opens all three attractions to veterans at no cost, regardless of residence.”

There is a catch, though, that those who do not live in San Francisco will have to pay a little more. The Conservatory of Flowers website is not yet updated with $0 prices for SF residents, but the Japanese Tea Garden website is. Both of those sites currently show non-resident admission as $10, with lower prices for seniors and youth. That’s what those tickets have cost for years.

Expect those out-of-towner rates to get jacked up to $13 someday soon. The Chronicle reported in March on the coming out-of-towner price hike that Rec and Parks “officials currently expect to raise daily garden admission prices to $13 from February to October and the cost may be higher for special events. The department is also planning to debut a multiple-garden discount ticket this summer.”

Related: SF Residents May Soon Be Able to Visit the Japanese Tea Garden and Conservatory of Flowers Free of Charge [SFist]