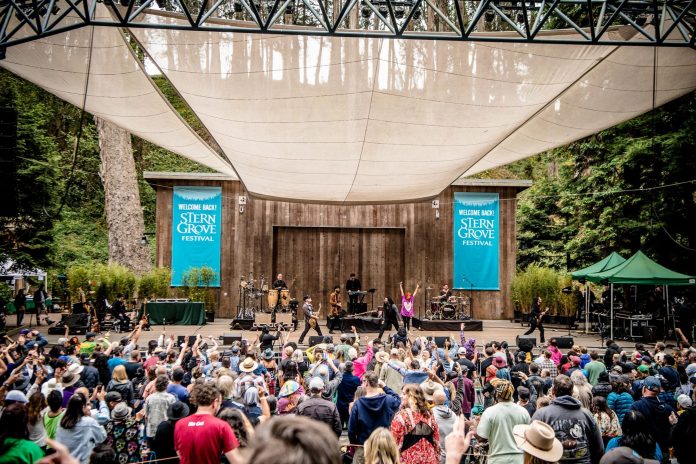 This summer’s Stern Grove lineup apparently gushed out a little early, on Muni ads of all places, with Tower of Power and Too $hort resuming where they left off, plus Liz Phair, Cat Power, Phil Lesh and Friends, and Old Crow Medicine Show.

It would make perfect sense for Tower of Power and Too $hort to be the kickoff performances for the 2022 Stern Grove Festival free outdoor concert series; those were the two acts that were canceled for the 2021 festival’s final Sunday when an August 23, 2021 water main disaster waterlogged any possibility of their scheduled August 29, 2021 performance. What doesn’t make sense is for the Stern Grove 2022 schedule to be leaked accidentally in a set of Muni advertisements seen about town a full 12 days before the official scheduled announcement.

And yet! The schedule seen below was seen on a Muni ad on Friday and posted to social media, and both the Chronicle and KQED have picked up the story of this perfectly legitimate-looking, likely accidentally leaked Stern Grove Festival 2022 schedule.

Those dates are all Sundays, so the schedule does check in that regard. And if accurate, this is one hell of a schedule! Yeah, yeah, most of these acts peaked in the 1990s or earlier, but this roster is still drawing plenty of “Better lineup than Outside Lands” sentiment.

SEE U AT STERN GROVE IN AUGUST ⚡️🥵🌳🐢🪕 pic.twitter.com/Gxz5zaADvT

Another person saw the ad separately and posted it to Twitter later Friday afternoon, in what appears to be a different photo. Both KQED and the Chronicle reached out to the Stern Grove Festival for confirmation, but neither got any response.

For their part, the Stern Grove Festival’s website still says “LINE-UP ANNOUNCEMENT COMING MAY 3,” and even though this leak has been in the news cycle all weekend, they appear to be sticking with that plan.

This leads to the question, did they leak this on purpose? That seems unlikely; it would require coordination between SFMTA, SF Rec and Parks, and the nonprofit Stern Grove Festival Association. If we’re talking two SF government agencies plus one nonprofit, with all due respect, a fuck-up seems the likelier explanation.

Regardless, this is an outstanding Stern Grove Festival schedule, and after a giant gusher of water ruined the end of last summer, a little leaked schedule has us already circling certain Tuesdays 12 days before each performance, which is when the free tickets become available (and often sell out very quickly).