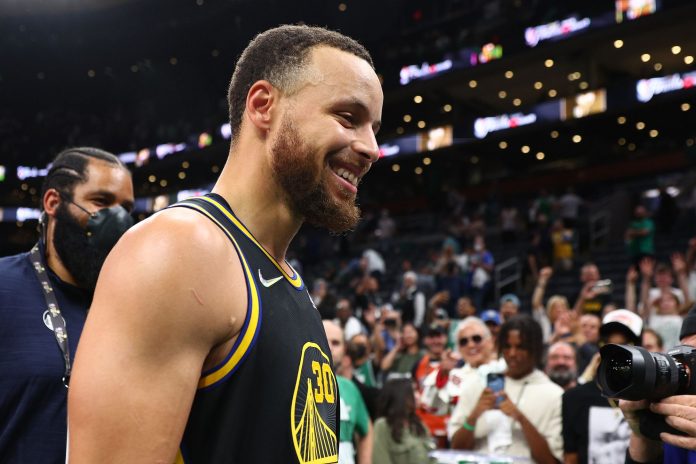 Steph Curry Goes Nuclear as Warriors Eke Ahead of Celtics in Fourth Quarter to Claim Game 4, Even Series 2-2

Ladies and gentlemen, Mr. Stephen Curry. Forty-three points and 10 rebounds, and a “god-mode” performance. That is all. Story over.

The neck-and-neck, hard-fought nature of Game 4 was perhaps exemplified by the last quarter, where the Golden State Warriors, who were either down by two, or tied, were nipping at the heels of the Boston Celtics. “It was just kind of a slug fest,” said Draymond Green on his podcast of the final 12 minutes. “They hit, we hit.”

About halfway through the fourth, the Warriors committed a few careless-looking turnovers, the Celtics took a five-point lead, and I stopped breathing, and started contemplating “down-1-3-in-the-series” angles for this story.

The Warriors clawed back to within one, but Marcus Smart hit a buzzer-beater three pointer for part of his 18 points on the night. It was 94-90 Celtics, with five minutes left in the game. On the other end, Andrew Wiggins was grinding under the rim, nabbing a few of his career-high 16 rebounds, and scoring a handful of his 17 points on the night. Klay Thompson, who hadn’t been having a great game, found rhythm late for some of his 18 points, and hit a huge, huge three pointer with four-and-a-half minutes left to finally put the Warriors up by one, 95-94. They would keep the lead for the rest of the game.

But I still held my breath.

Steph Curry reveled in the the thrill of the fight last night, rising up to the challenge of his rival. From the opening tip, Curry had the eye of the tiger. (Photo by Elsa/Getty Images)

There was, however, a bit more Steph Curry-ing to be done. A clutch floater was followed by a three pointer, one of his 7 triples on Friday. The Warriors were up by six. Al Horford hit a corner three to bring it back to a single-possession game with a minute and a half left. On the next Warriors’ possession, Steph was double-teamed outside the arc, and dished it to Draymond Green, who passed to Kevon Looney for a layup. On the next Celtics’ possession, Jaylen Brown, who played an outstanding game and had 21 points on 19 shots, turned the ball over with less than a minute to go.

I decided to breathe again.

Then it was Steph Curry free throws for the rest of the night. In a game that saw multiple lead changes and a few runs on either side of the ball, neither team ever had a double-digit advantage, until Curry was at the line. The Warriors took Game 4 107-97 to tie the series at 2-2 heading back to Chase Center on Monday. It was a spectacular win culminating a fantastic game, with the Stephen Curry sitting atop the pile, as if on a gilded throne.

“He put us on his back [and] willed us to a much-needed win — a game we had to have,” said Draymond Green of Steph at the postgame press conference. “He came out and showed why he’s one of the best players to ever play this game.”

Stephen Curry was pouring out emotion last night in Boston — it was mostly joy, but a little frustration, as well, on some non-called fouls, especially after he hit a three pointer late in the third quarter, took a shove from Jason Tatum, and came up seething (bottom left photo). “How often do you see Steph Curry get upset?” asked Draymond Green on his podcast. “I mean, he was locked in from the very beginning. He hit the three in the first quarter and started talking to the fans. And when Steph starts talking to the fans, it’s never a good sign. Well, it’s a good sign for us.” (Photos by Elsa/Getty Images)

Oh yeah, wasn’t there something about Stephen Curry’s foot in the news?

On Thursday, Steph was peppered with questions: “What have the last 24 hours been like for your foot? Did you get any imaging? How did your foot feel immediately after the pile up and during the next few possessions? If this injury happened during the regular season, would you see yourself sitting out? What would you say your level of pain is? Is there any concern about how this might affect your mobility?”

If Curry was bothered by his foot in any way, it was not apparent, or perhaps his salve was to simply to score 40-plus points. Were there, perhaps, some mind games going on? Did Steph take a page out of Sun Tzu’s The Art of War ?: “Appear weak when you are strong, and strong when you are weak.”

Ladies and gentlemen, we now take a break from Stephen Curry’s foot and 43 points to check in with Mr. Andrew Wiggins, who has been a reliable two-way player throughout these playoffs. (I say that in every caption after every game, because it has always been true.) Wiggins made some critical plays on both ends of the floor last night, especially in the fourth quarter. (Photo by Elsa/Getty Images)

The other major, non-Steph Curry storyline from last night was Draymond Green’s roughly four-minute absence toward the end of the fourth quarter. After missing a few shots — he was 1-7 from the field for 2 points — Green seemed a little hesitant around the offensive rim. “I’ve been struggling,” Green said on his podcast. “I played a better overall game tonight, [but] I was definitely struggling from the field, struggling on the offensive end.”

As the Warriors were clawing their way back into the game during that hit-for-hit fourth quarter, Green was on the bench, with Kevon Looney putting in work. (Looney had 11 rebounds and 6 points.) “You’re definitely never thrilled coming out with seven minutes to go in the fourth quarter of a must-win game,” Draymond said at the postgame press conference.

Upon his return, however, Green’s impact was felt — he came away 9 rebounds, 8 assists and 4 steals on the night.

“Draymond, who might not have had his best game, made huge plays there at the end,” said Klay Thompson at the postgame press conference. “Huge rebounds and huge stops. It doesn’t matter how you shoot the ball or what your numbers say. The only thing that really matters right now is getting that win.”

(Top photo:) There is no stat for setting screens. Draymond removed Jaylen Brown from the equation for a Steph Curry made three last night. (Bottom:) This year’s Finals have pitted two of the best defenders in the league, Marcus Smart and Draymond Green, against each other. In addition to his 18 points, Smart had 4 rebounds, 5 assists and 4 steals on Friday. (Top image: Photo by Winslow Townson/Getty Images / Bottom image: Photo by Elsa/Getty Images)

At one point in the fourth quarter last night, dizzy from a lack of oxygen, I reminded myself to enjoy the exceptional contest that I was witnessing. I might have even smiled. Win or lose, wow, what a game.

“It was a gutsy win that was a ton of fun, believe it or not — no matter how queasy the fans might get, or emotional,” Klay Thompson told reporters.

Klay was obviously talking about me.