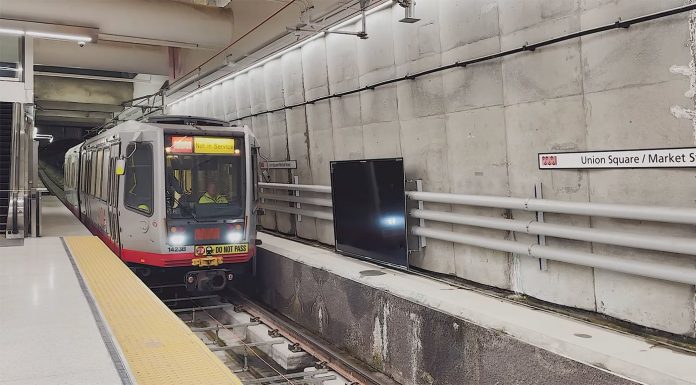 Following a small fire that damaged some electrical equipment in one of its stations, the super-extra-delayed Central Subway project has just tacked on another delay of six to eight weeks, meaning it won’t be opening in October.

Our latest update on the Central Subway project is, predictably, another announcement of a delay. At this point, most San Franciscans have likely forgotten that there is a new Muni train line set to open this year, running a relatively short distance but nonetheless making it far easier to get to North Beach and Chinatown for those of us who don’t live at that end of the city. The SFMTA’s Central Subway is so delayed by now that it almost makes California’s high-speed rail project look swift and easy.

As the Chronicle is reporting, a small fire in June inside the new Yerba Buena/Moscone Station has put a halt to train testing in the Central Subway tunnels, which is the final step that has to be completed before a public opening can occur. Neither the station nor any trains were damaged, but “A surge arrester ignited a fire inside a circuit breaker cubicle and damaged two other cubicles — all three of which need to be replaced,” according to the SFMTA’s acting chief financial officer, Jonathan Rewers. Rewers reported the news to the SFMTA’s board of directors on Tuesday.

The delay, Rewers said, would be six to eight weeks, but they’re still planning for a “fall” opening, as previously promised.

A federal oversight administrator already estimated earlier this year that the new train line wouldn’t be running until December or later, despite the SFMTA’s last assurances of an October opening — and they were right!

The Central Subway project dates back well over a decade, with voters approving the project back in 2003, and construction began in 2010. The original completion was estimated to be in late 2018, but the delay announcements started rolling in back in 2017, and they’ve gotten pretty repetitive. As of ten months ago, the SFMTA was saying the project was 98% done and trains would be running by “early summer 2022.”

Originally estimated to cost $1.3 billion, the project’s budget went up to $1.6 billion in recent years, and the SFMTA says the project is still within that budget.

When completed, the 1.7-mile subway line will connect 4th and Brannan streets near Caltrain — a surface-level station — with Chinatown, with two stops in between at Yerba Buena/Moscone Center and Union Square.

A video below talks about the “finishing touches” and testing phase going on now. Per the SFMTA, “During the final phase, project staff will continue to engage our community partners and develop a communications plan to inform Muni customers of the first day of service.”

Previously: Report: Central Subway Opening Likely to be Delayed Yet Again, Might Not Happen This Year