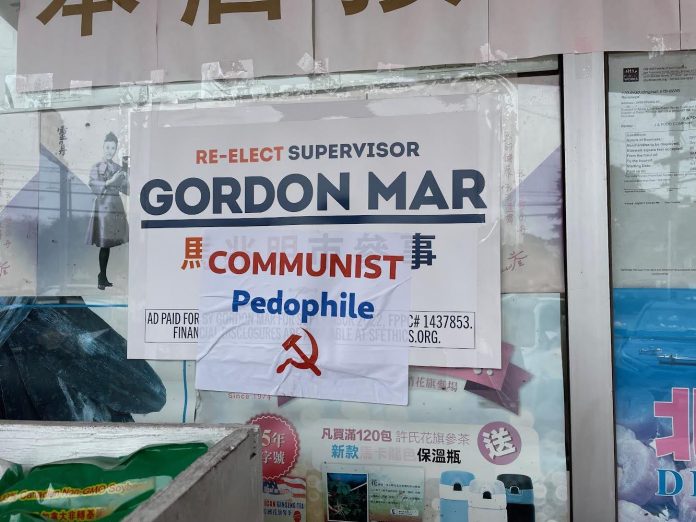 The Epoch Times-Shen Yun faction of San Francisco politics is slinging some pretty toxic mud at District 4 Supervisor Gordon Mar, with an anonymous flyering campaign accusing him of “grooming children” and providing “free money to crackheads.”

It’s an election year, so you can expect to see increasingly ugly attacks lodged as the summer turns to autumn and turns to November 8. But in the City and County of San Francisco, you do not expect to see QAnon-type attacks full of demonstrable racism and Pizzagate pedophilia theories. Yet here we are with the upcoming supervisorial race in the Sunset, as the Chronicle reports of anonymous flyers smearing Supervisor Gordon Mar, with descriptors like “Communist Pedophile” and “Grooming Children.”

Over the weekend and under the cover of darkness, someone decided to paste these flyers over our window signs in small businesses across the Sunset.

This isn’t the first time I’ve been targeted with reactionary, ridiculous smears. A thread: pic.twitter.com/UDs9yLmP2m

The two examples above were posted by Mar himself in a Tuesday tweet, saying they were applied “Over the weekend and under the cover of darkness.” One of them affixes the words “Communist Pedophile” onto a Mar campaign sign posted at what appears to be a produce market.

The second sign goes harder, bullet-pointing Mar’s name with “More Drugs, More Homelessness, Grooming Children, Free Money to Crackheads, Kick out the Chinese, bring in Gangs.” That one is slapped over an event flyer from the Chinese Real Estate Association of America, an apolitical group that mostly does social mixers and webinars for real estate agents. It does not appear the anti-Mar flyers are targeting that association per se, it’s probably just that their event poster is nearly three years old, and seemed fair game for covering over.

Nonetheless, this is hardly a far cry from the “No Slums in the Sunset” flyers that popped up last summer — flyers that labeled a proposed affordable housing project in the neighborhood as “the best place in San Francisco to buy heroin,” and called Mar a “CCP member” (meaning Chinese Communist Party).

Mar took to Twitter and declared, “These flyers bear a striking resemblance to the ‘No Slums in the Sunset’ flyers that also used red scare rhetoric to attack me for daring to support affordable housing for working families.” Mar additionally linked the flyer campaign to the anti-LGBT “groomer” and “pedophile” tropes, and the death threats against Sen. Scott Wiener over his trans rights legislation.

Mar is up for reelection in November, in what might end up being a competitive race. He has two opponents in Joel Egardio and Leanna Louie, both of whose candidacies seem predicated criticizing Mar for opposing the recalls of school board members and DA Chesa Boudin. Both Louie and Engardio have condemned the flyers on social media.

But the flyers certainly speak to an emerging Trumper element in SF Chinese-American politics. Obviously, there is not a lot of unpacking we need to do when suggesting that “Free Money to Crackheads” and “Bring in Gangs” are very obviously racist sentiments.

But the “Communist” attack is straight from the pages of the Falun Gong-affiliated newspaper Epoch Times, a free paper found about town that virulently opposes the current Chinese government (they’re also behind the running joke that is Shen Yun). And that paper has greased the skids for “Communist” to be a gateway insult that leads to automatic affiliation with Satanic child-sex cabals. Whomever is behind this clearly sees the tactic of using Mar’s Chinese-American heritage against him, in a district with a large Asian-American plurality, as a strategy to turn some voters against him. But is anyone buying it?

Related: Mad Mud is Flying as Six Supervisor Seats Are Up for Grabs in November Election [SFist]