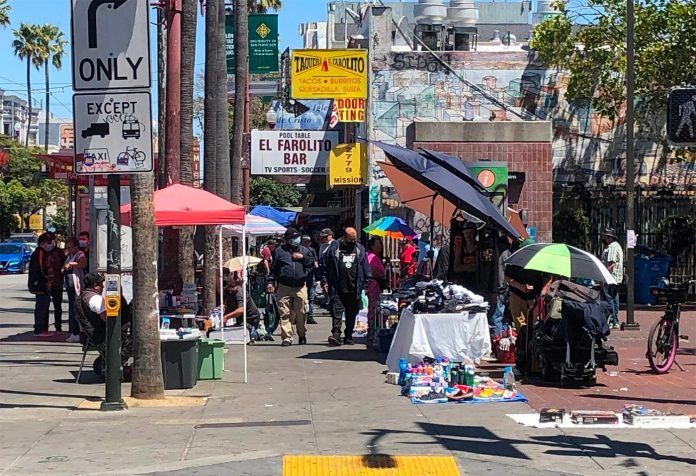 Not satisfied with the city’s enforcement efforts so far, BART announced Tuesday that it was fencing off the plazas around 24th Street Mission Station in order to evict the street vendors from the area who have been hawking mostly stolen merchandise.

It’s not clear if BART’s efforts are in cooperation with the city, or what. But BART put out a press release Tuesday (currently offline) announcing that the temporary fencing would be going up around the plazas at both station entrances at 24th and Mission streets. The fencing will stay up for 60 days, and access to both entrances will be available, just with a narrower walkway and no room for vendor setups.

BART said in the release that the illegal vending market was “an area of concern for city officials, members of the public” and BART riders. “The plazas at 24th St Mission offer a vibrant public space and we look forward to working with the city to reopen them while providing a safe, welcoming environment,” BART says.

SF Supervisor Hillary Ronen spearheaded an ordinance that passed in March to address the growing problem of the street vendor marketplace, which has been more robust and rich with hot merchandise in recent months than it’s ever been. The ordinance still allows for people to sell used items, and Ronen said at the time, “Only folks selling new and labeled items will be required to show proof of ownership, so that we do not interrupt the sale of used goods.”

Supervisor Ahsha Safai called the ordinance a “great suppression tool” and he said he expected that it would “force a lot of the people that are taking these stolen items showing up on the street to disperse.”

But that hasn’t really happened in the month since the ordinance took effect — and SFist observed the marketplace in full swing on Sunday with over a dozen vendors with significant table and blanket setups across both plazas. The goods ranged from new appliances and toys to over-the-counter medications and personal care items likely pilfered from places like Walgreens and Target.

SFist was also at the plaza last month, the day that the ordinance kicked in, and only a smattering of enforcement seemed to be occurring.

While the ordinance may be aimed at cleaning up the plaza and addressing the quality-of-life nuisance created by the growing number of vendors, it’s not likely to curb the cycle of merchandise theft and resale. San Francisco Police recently arrested one alleged fencing kingpin whose Glen Park home was filled with $200,000 worth of allegedly stolen merchandise, including over-the-counter medications and the like. His operation, police estimated, was likely bringing in $500,000 a year in profit, and he was doing all of his sales through online marketplaces like Facebook and Amazon.