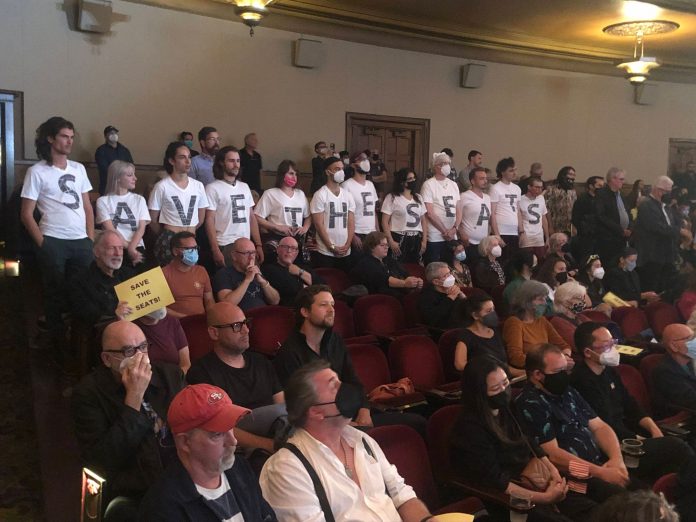 A packed Castro Theatre saw a slew of “Save the Seats” activists sound off at a raucous public meeting about the theater’s future Thursday night, and there were other concerns that Another Planet’s Entertainment’s rebooted Castro Theatre might also be a Ticketmaster-only venue.

There’s been a movie-marathon of community outrage since the January announcement that Another Planet Entertainment would be taking over management of the Castro Theatre, and as such, would be replacing film programming with more commercialized live music events. One of the biggest points of contention has been Another Planet Entertainment (APE) planning to remove the lower-level seats of the theater, replacing them with standing areas or cocktail tables, and using temporary seating for film screenings.

Neighborhood merchants and cultural groups have not been shy in voicing their disapproval that replacing the Castro’s largely LGBTQ+ film programming repertoire would bring a much more straight audience into the theater, and by extension, into the neighborhood itself. There’s tremendous anxiety this could affect the fabric of the neighborhood with a lack of respect for its heritage, much like Halloween in the Castro was ruined in the early to mid-2000s by rowdy out-of-towners.

Save the seats! #castrotheatre @anotherplanet it’s not just elders who want to keep the Castro affordable and central to the LGBTQ community pic.twitter.com/r1DYnMgzfM

So APE set up the first public meeting at the theater Thursday night to discuss their plans, hoping to quell concerns over the future of the city’s traditional favorite movie palace. And people showed up; the lower level of the theater was standing room only capacity, and the balcony was opened for crowd overflow (which, let’s be honest, that’s been rare in recent years). SFist was there, and heard longtime fans of the theater bemoan how they felt APE’s plans were “the abomination of a cultural institution.”

In addition to the highly contentious issue of removing and replacing the Castro’s seats, there have been rumors that the theater’s ticket sales would be handled exclusively through Ticketmaster. Now in fairness, Ticketmaster is not linked whatsoever on the Castro’s upcoming event calendar, which is now on APE’s website. But other APE venues do have exclusively Ticketmaster links, so the concern seems legitimate.

“We have not said we’re going to work with Ticketmaster. That’s sort of some misinformation that’s out in the world,”  APE senior vice president Mary Conde told the crowd Thursday night. “We haven’t chosen the ticketing platform that we will use at this venue.”

Learn more about the renovation plans for San Francisco’s beloved Castro Theatre which will allow it to be continuously glorious and accessible to all for years to come ❤️ Watch the full video at https://t.co/maGnWTikeg pic.twitter.com/OJwTaXhj0h

The evening began with an introduction from the district’s former supervisor Bevan Dufty (who admitted he’s being paid $7,500 a month to advocate for APE on this project). They played an homage film to the theater which also goes into APE’s future plans for the venue; a snippet of that film is seen above, but you can watch the whole video on the Castro Theatre website.

APE did give some concessions to opponents of these plans — literally. Free popcorn and beverages were served, they let the meeting go an hour over schedule so everyone who wanted to could speak, and they allowed stage presentations from public opponents of the plans like the Castro LGBTQ Cultural District and the Castro Theatre Conservancy.

“The traditional movie house seats will be replaced by either folding chairs or stacking chairs, set up on temporary risers on top of flat platforms,” said Peter Pastreich, executive director of the Castro Theatre Conservancy. “Now there must be some reason that there is no significant movie theater anywhere with portable chairs sitting on temporary risers.”

Glad to see so many people at the @Castro_Theatre to protest the vandalism. The photos do not inspire confidence in the final product. pic.twitter.com/PjPd7Gu4t2

Above we see the two renditions of how seating (or lack thereof) would be utilized at live concert events. And presumably, most events would be concerts, but films would still be shown. Huestis pushed APE’s Conde on what the seating capacity would be for films.

“We have not determined the seating capacity,” she said. “We don’t know exactly, because we don’t know the exact chair” that would be used in the redesign.

“I made a living, a very meager living, doing shows here,” Huestis said. “For 100 seats or 200 seats in the orchestra, that’s where the most expensive seats are sold. [Without those, I] don’t make a profit.”

Here is what the audience was shown as a rendition of the movie seating layout, and yes my smartphone did not take the best picture. But as you see, it’s temporary seating with chairs that are not bolted to the floor.

“I don’t think it’s fair to characterize them as folding chairs,” said lead architect Christopher Wasney of CAW Architects. He noted that the chairs are cushioned, there would be armrests and cup holders, and there is a height difference with chairs on the same platform, so the person in front of you does not block your view.

A rendering of the movie seating arrangements is shown below.

But boy did Wasney draw jeers and hisses when he said the flexibility of the layout would allow for “Banquets, fundraisers, weddings, and parties.” That was greeted with a chorus of boos, and someone shouted “Weddings for billionaires?”

“I acknowledge the rich culture of audience participation,” at the Castro Theatre, Wasney quipped. “I’m sure you will not hold back your thoughts.”

There was some support for APE’s plans, the comments went about 85%-15% against APE’s proposals. But there is absolutely some sentiment that APE has been a terrific steward of other historic theaters, that the foot traffic they could bring could lower the neighborhood’s retail vacancies, and that they could make the Castro Theatre more economically viable than it’s been in years.

“The option to save the theater might be a partnership with Another Planet,” said one community member Johnny Delaplane. “This theater is beautiful, I don’t want to see it become a Crunch Gym like the Alhambra on Polk Street.”

And the changes are already underway. APE has already taken over the Castro Theatre’s website, and as you see above, all the old movie posters are gone. These are replaced with posters for other upcoming APE events. That Alaska poster above seems a good fit for the lobby at first glance, but notice how it is for a show at The Independent, and the same goes for all the other movie posters removed from the downstairs washroom levels. The transformation is happening, for better or worse.

“I want to be part of the team that helps the Castro Theatre survive another 100 years,” Conde told the crowd. “I don’t see what we’re doing as destroying the theater.”

But the question is whether that future Castro Theatre is a place you could afford to attend. Or whether you would even feel welcome there if you could.