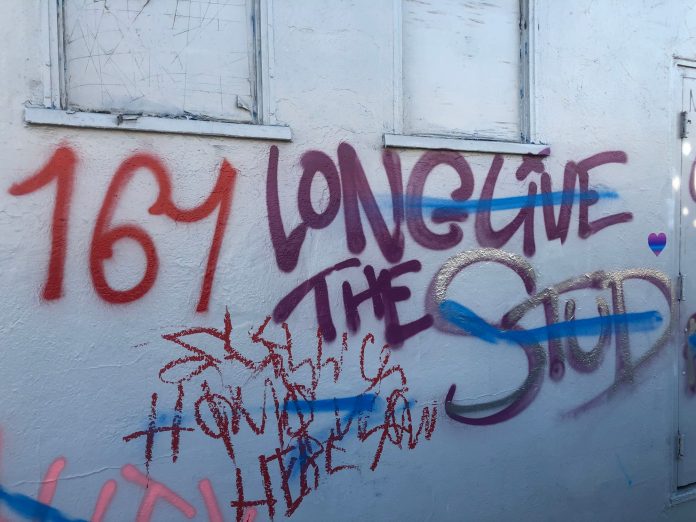 The Stud’s Former Home Got Thoroughly Tagged On Pride Weekend, and Then Countertagged On Top of That

In what may became an annual Pride Weekend tradition, the SoMa building that formerly housed The Stud got slathered in graffiti over the weekend, but then took more graffiti from someone apparently not pleased with the “queer revolt” messaging.

Warning: This post and its photos contain a little profanity here and there.

Any San Francisco storefront that has remained vacant for multiple years is likely to be on the receiving end of some graffiti. That outcome is far more likely should the vacant storefront be located in a place like the Mission District, the Tenderloin, or South of Market.

But there’s a special place in taggers’ hearts for tagging up the former home of The Stud, especially on Pride Weekend. You’ll recall that SF’s former oldest continuously operating LGBTQ bar, which tragically shuttered during the pandemic, was adorned with a fabulous array of murals just before Pride Weekend 2017. But the building’s new owners painted over the murals with “a boring ass beige color” in 2020, resulting in a Pride Weekend coating of graffiti just a few days later.

And so that Pride Weekend tagging returned for 2022. It seems pretty clear that much of this graffiti has been applied since this past Friday, as the messages “Abort the Court,” “Abortion 4 All,” and “Get an Abortion” don the walls. The Supreme Court decision on abortion was handed down Friday morning.

Yet it also appears that some malcontent, less skilled with the spraycan, tagged over the original taggings. Some of the messages are crossed out in blue spray paint, or have “Fuck You” written over or adjacent to the original graffiti.

There’s also the matter of the six local muralists who sued the building owner for covering their original murals. That suit was filed in November 2020. SFist has reached out to their attorneys at the Erikson Law Group for a status on that suit, and we’ll update this post with any updated information.

And as far as The Stud itself, well, the collective that bought the bar is still doing performances, albeit without a brick-and-mortar home. They’ve had recent performances at Oaklash and The Independent, and as seen above, have an upcoming July 3 show on Out at the Fair Day at the Marin County Fair.

Related: Stud Stories: Remembering a Bar That Epitomized Everything Great and Weird About San Francisco [SFist]

Facebook
Twitter
Pinterest
WhatsApp
Previous articleGreat America’s Land Sold to New Owners, It Will Close in Six Years or ‘Up to 11 Years’
Next articleChesa Boudin Won’t Say That He Won’t Run Again For San Francisco DA