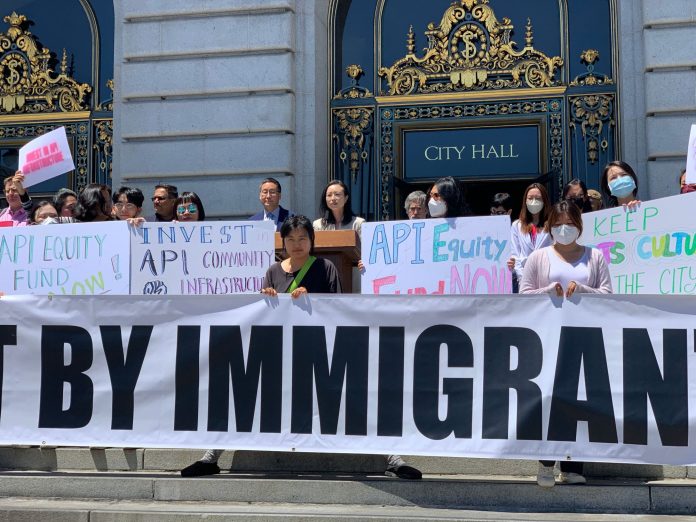 Supervisors Chan, Mar, and Peskin hit the steps of City Hall Tuesday to propose a $118 million Asian and Pacific Islander Equity Fund, which is a big ask, though similar to the current African-American community reinvestment fund.

When then-Supervisor Matt Haney proposed his formal apology to the Chinese-American community for historical atrocities (which ultimately passed in February), there was skepticism that it would be anything more than symbolic. “Are reparations on the table? What about reinvestment in the Asian community and its organizations?” executive director of the Chinese Historical Society of America in San Francisco Justin Hoover asked the Chronicle at the time. “An apology is great, it truly is, but it can’t just be a gesture.”

Well, he might have had the magic words with “reinvestment in the Asian community.” That’s exactly what’s proposed in a $118 million Asian and Pacific Islander (API) Equity Fund that the Chronicle reports Supervisors Connie Chan, Gordon Mar, and Aaron Peskin introduced on the steps of City Hall Tuesday, flanked by a “57-member coalition of local nonprofit organizations,” who in many cases, would likely be on the receiving end of those reinvestments.

“At a time when Asian and Pacific Islanders are facing increased threats — from violence, displacement, and gentrification — we must increase our investments in the safety, security, and resilience of our API community,” Mar said Tuesday, according to the Chronicle.

Last year, we redirected $120 million from law enforcement to our African-American community. Today we're announcing the spending plan for that funding.

We're listening to Black voices, committing resources, and working to rectify the injustices that have continued for too long. pic.twitter.com/1hetlP5vq9

Surely $118 million sounds like a big chunk, but the money is already in the city’s wallet. This would be similar to the Mayor Breed and Supervisor Shamann Walton’s $120 million Dream Keeper Initiative toward certain strategic sectors supporting SF’s Black community. And per the Chron, the money is already available in a $294 million “fiscal cliff reserve” which they say is “to manage budget shortfalls and consists of unspent federal and state COVID relief aid.”

“We’re looking for real action, some real implementation by the city that’ll help API communities,” API Council executive director Cally Wong told The Chronicle. “This opportunity now with the softening of commercial property markets, and a great amount of demonstrated community need, will really ensure that our services will have a home for decades to come.”

Ummm… “softening of commercial property markets?” I’m all for community investment, but commercial landlords don’t necessarily seem like the neediest demographic in the San Francisco AAPI community right now. That quote was not a binding statement of how funds would be awarded or anything. But it is a reason to be worried that the “community investment” might go to people with the most proximity to City Hall power, rather than the people who most need community investment.