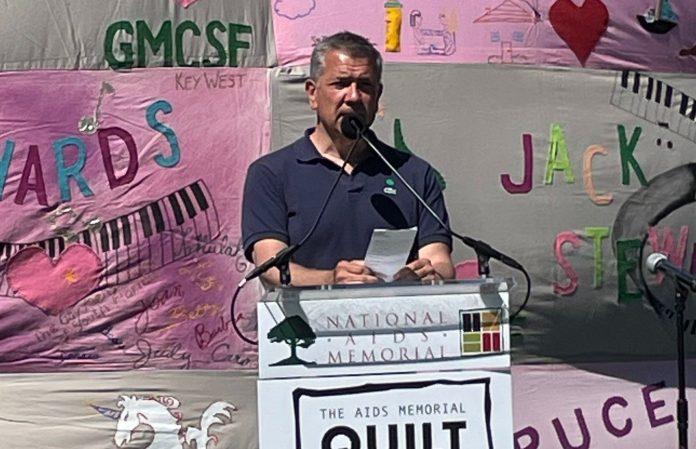 San Francisco’s supervisorial District 6 is now 36 days into the Matt Dorsey era, after Mayor Breed appointed him in early May, and his first big piece of proposed legislation announced today dovetails into one of her pet programs. According to the Chronicle, Dorsey introduced a measure that would establish ‘drug enforcement priority zones’ near any SF recovery facilities, directing police to prioritize arresting drug dealers in said enforcement zones.

“The proposed legislation ‘would neither change nor enhance existing penalties for illegal drug use or sales,’” Dorsey’s office described in a press release to SFist. “Rather, it would create ‘Right to Recovery’ zones as designated priorities for local law enforcement in which police officers would be requested to… Immediately confiscate illegal drugs and paraphernalia being used or displayed publicly, with or without citation” and “immediately arrest and take into custody anyone engaged in the sale of controlled substances.”

Critics of Mayor Breed’s city-sanctioned supervised drug-use sites will surely chortle that people would be allowed to use drugs inside recovery facilities, but then be more likely get busted using drugs outside those rehab facilities. That’s a reductive argument, but Dorsey seems to realize that will be a critique of his plan.

“That’s especially true as we make progress on supervised consumption sites,” Dorsey told the Chronicle. “Unless we can assure neighborhood residents that we are going to designate that as an enforcement priority, we’re going to get a lot of pushback.”

WATCH: We shadowed newly-appointed D6 Supervisor @MattDorsey as he walked around the SoMa neighborhood and spoke to residents and small business owners.

Here’s what some of his constituents had to say. (1/3) pic.twitter.com/qafFnf7twE

Whether this legislation is effective, or just a headline-grabber, wholly depends on whether SF police actually arrest people, and there’s plenty of discourse saying that they kind of just don’t bother these days. The SF Standard did Dorsey a solid favor by making a video that followed him around allegedly listening to constituents, seen above, and one constituent commenter made a comment about police on that point.

“I never see like, any actual, like, arrest being made,” a resident tells Dorsey. “They kind of just move things around, they just move around in a circle, but the problem moves.”

The displaced residents of #33Tehama are passing their time with memes. Can’t take credit for it, but accurately describes the mood in the community. #Hines @PEPSF @mattdorsey pic.twitter.com/sHXNneo8ZE

This is not a District 6-specific proposal, and it would apply citywide. (And the six-month-old Tenderloin Center facility is now redistricted out of Dorsey’s district, albeit barely). But it’s a big-picture move, not a localized constituent services move. And judging from social media, the hundreds of currently nomadic tenants displaced by the 33 Tehama flooding don’t seem to feel they’re getting a whole lot of constituent services out of Dorsey at the moment.

Moreover, should this measure not appreciably affect the overdose rate or visibility of the drug trade, it gives his November opponent Honey Mahogany an easy attack line about over-relying on policing, and potential police harassment of people of color.