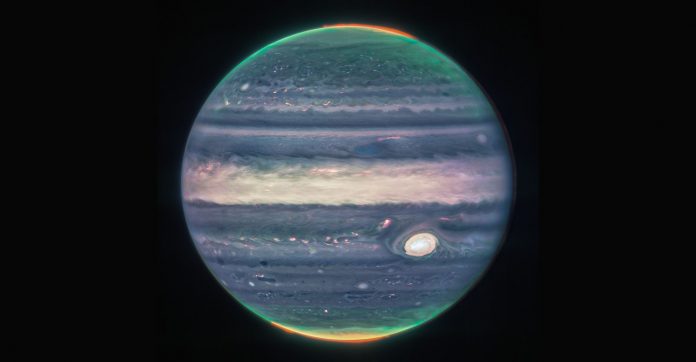 The best pictures ever of the biggest planet in the solar system have been unveiled, and it turns out an astronomer at UC Berkeley played a major role in making them happen.

A stellar new set of images of a planet that is 380 million miles away were released on Monday, but they come to us largely because of the work of an astronomer just a few miles away on the other side of the Bay. NASA released a new set of images of Jupiter, taken by the Webb Space Telescope (yes, the telescope with the controversy over who it’s named after).

The images are stunning, and give us some of our best looks ever at Jupite’s moons, auroras, and of course, its celebrated “red spot.” The spot, which is actually a very big storm that is larger than the planet Earth, appears as white in these images because of the reflection of the sun.

Yet there’s a local angle to the out-of-this world story. As KTVU reports, “A Bay Area scientist was the principal investigator. Imke de Pater, a UC Berkeley professor emerita of astronomy and planetary sciences, led the team of experts who were analyzing the data.”

“We hadn’t really expected it to be this good, to be honest,” de Pater said in a NASA press release. “It’s really remarkable that we can see details on Jupiter together with its rings, tiny satellites, and even galaxies in one image,” she said.

This is not exclusively a UC Berkeley project. CNN explains that Professor de Pater is working on the Webb telescope’s Jupiter observations with Paris Observatory professor Thierry Fouchet. And the Webb telescope “is itself an international endeavor by NASA with the European Space Agency and Canadian Space Agency,” according to CNN, and is “using infrared light to reveal otherwise invisible aspects of the universe.”

Check out the bright waves, swirls, and vortices in Jupiter’s atmosphere — as well as the dark ring system, one million times fainter than the planet! Two moons of Jupiter, including one that’s only about 12 miles (20 km) across, are on the left. pic.twitter.com/o7XYOMdsq5

Okay, yes, the photos have been “doctored,” so to speak, in that they’re really just packets of data that the telescope sent from the outer realms of the solar system. They’ve been rendered into what the data tells us the planet would look like to the naked human eye, a process also largely handled in northern California by a Modesto image processor named Judy Schmidt.

“They don’t look like this straight from the telescope,” de Pater told KTVU, adding that Schmidt “made a mosaic of 32 different pieces.”

But let’s cut right to the big question here: Are we going to see pictures of aliens? There is a not-zero chance that yes, we might.

“The telescope is also discovering and observing exoplanetary systems, which each consist of a planet outside of our solar system and its host star,” as CNN explains. “Some of these exoplanets are potentially habitable, and peering into their atmosphere could uncover clues in the ongoing search for life outside of Earth.”