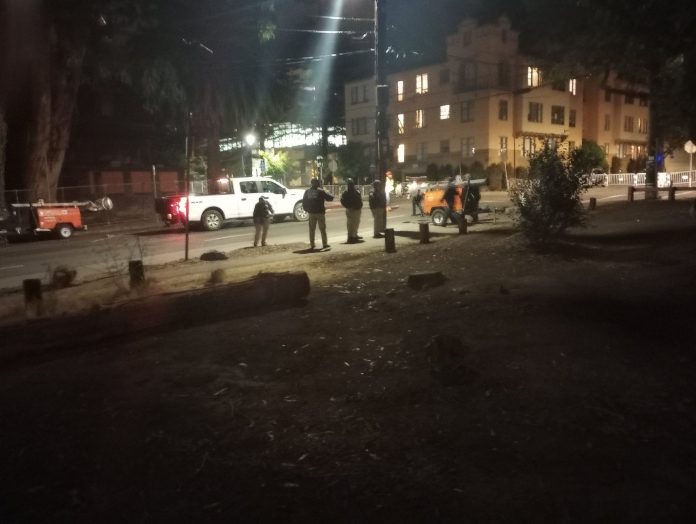 [Update] More Bedlam in Berkeley, Prostesters Retake People’s Park and Halt Construction After Park Was Fenced Off and Cleared

A combination of surreal scenes in Berkeley, as protesters halt construction in People’s Park, after it was gated off and crews lopped down the park’s trees to make way for a 16-story housing project.

Update (3:47 p.m.): Our statements that People’s Park had been successfully fenced off and cleared are no longer operable. The Chronicle is now reporting that “Several dozen protesters made a last-ditch effort to halt the construction of a controversial student housing development at UC Berkeley’s People’s Park Wednesday, knocking down security fencing and planting themselves in front of construction vehicles to oppose the project.” The Chronicle adds that “protesters had ripped down most of the security fencing, reoccupied the park and halted construction efforts before they began smashing windows and mechanical components on several bulldozers and earthmovers. Multiple vehicles and pieces of equipment had wires clipped, spark plugs removed and unknown materials dumped into gas tanks.”

Protesters halt construction at UC Berkeley’s People’s Park after a clash with police in Berkeley. Read full story by @SarRavani, @jparkerwrites and @ctuan for the @sfchronicle here: https://t.co/u4s5hxC5WZ pic.twitter.com/S8mCCBn5AK

Original Story (11:47 a.m.): It’s not unusual to see Berkeley protests devolve into anarchy — that’s been happening for decades. But the razing of 53-year-old People’s Park, a counterculture landmark spot since the Vietnam-era protests of the late 1960s, was sure to bring demonstrations from the activist set as the park is being leveled to build a 16-story student housing complex there.

Poignantly, it was a stalled development plan by UC Berkeley and a dirty lot that had become a dumping ground that spurred a group of student activists in 1969 to lay claim to the property, plant a few trees, and christen it People’s Park — and then defend it against a Governor Ronald Reagan-backed, military-style operation, during which one student died and another 128 were injured.

Combine the destruction of a park and its trees, the clearing of a homeless encampment of people who don’t want to leave, plus a college town that knows how to rabble-rouse with the best of them, and you’ve again got a formula for contentious confrontations between police and protesters, 53 years later.

4:12 a.m. A full team of officers in riot gear just moved into the park to remove the last tent and property of park residents. pic.twitter.com/HB3JJhgko8

That’s exactly what’s been happening since late Tuesday night. UC Berkeley Police and construction crews pulled a surprise late-night operation to fence and clear the park, as Berkeleyside reports. “Text message alerts fired off in channels for park supporters — ‘They’re taking the park,’” according to that site. “By 12:30 a.m., UC police and its community service officers had blocked off entry to all four corners of the park.”

5:58 a.m. More than 40 UCPD officers in riot gear and a dozen of Apex security guards are still posted on Haste and Bowditch streets, overseeing the construction of the fence at People's Park. A dozen more officers are posted inside. Activists also remain in the park. pic.twitter.com/NR5Upkf6Mt

“At about 2 a.m., construction floodlights cast a harsh light over the park as activists — a majority of them young people, accompanied by some longtime advocates — prepared to stand down the arranged machinery, forklifts and construction crews,” Berkeleyside adds in their on-the-ground report.”UC police made two arrests due to trespassing when activists sat down in front of machinery to block their access, and others were detained.”

The Chronicle adds a statement form UC Berkeley Police that they and the construction crews were pelted with “rocks, bottles, and glass.”

The construction trucks came rushing through to People’s Park and people ran in front of the moving trucks to stop them from clearing any trees. #Berkeley pic.twitter.com/8rK65Yb9j8

And the operation worked, as KRON4 adds that the park was gated and cleared by dawn. “There are multiple road closures along Telegraph Avenue to make sure nobody can enter the park, and advocates from a couple of citizen groups opposing the new housing project have been detained and removed from the park,” according to KRON4.

And stark, stunning videos have been emerging all morning of the park’s large, legacy trees being chainsawed down.

9:20 a.m. They are cutting down all the trees at People's Park. pic.twitter.com/IodXJh3xef

The action was legally approved in a Friday night Alameda County Superior Court ruling last week, as Berkeleyside reported then.

9:54 a.m. The Southside of People's Park has been completely obliterated. Cal employees are smiling, and contractors cheering as the trees come down. pic.twitter.com/VL9WPxJlEl

A group called People’s Park Historic District Advocacy Group says they intend  to appeal that decision, and they may halt this construction yet again. But for now, construction is moving forward on what plans to be housing for 1,125 students, and shelter for 125 formerly homeless individuals. And while the park is historic, it has certainly become a little rough around the edges with encampments in recent years — which led to general public apathy about saving it, and to the city council’s support for developing it.

“People’s Park has been a powerful symbol of resistance against government oppression,” Berkeley City Councilmember Rigel Robinson told the Chronicle, “but it has since become a symbol of something else entirely: our failure as a region to respond to the housing crisis. The time has come to turn the page and tackle these challenges head-on.”