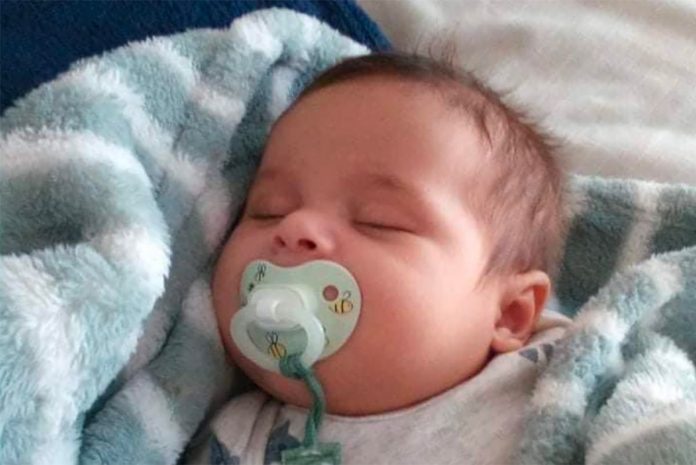 The real story behind the brazen kidnapping of three-month-old San Jose infant Brandon Cuellar is even nuttier than you might have imagined, and it involves a married woman with multiple boyfriends and a plan to possibly baby-trap one of them without getting pregnant herself.

The story of “Baby Brandon” made national headlines in April despite the boy only being missing for less than a day, after surveillance footage showed every parent’s worst nightmare: a man grabbing the boy in a baby carrier, in broad daylight, while his grandmother was unloading groceries.

It turns out that the woman allegedly behind the kidnapping plot, 44-year-old Yesenia Guadalupe Ramirez, was also present the moment the kidnapping occurred — and she pretended to help look for the boy when the grandmother, who knew her, called out to her. As the Mercury News reports, via investigators’ statements and court documents, Ramirez had a complicated scheme going on to entrap one or another of multiple boyfriends in her life by pretending that Brandon was her own child.

And her accomplice in the kidnapping was yet another boyfriend, an apparently lovestruck 28-year-old, Roman Portillo, who seems to have done whatever Ramirez instructed him to do. The pair, according to prosecutors, had attempted to abduct the infant from his mother and grandmother four times before ultimately succeeding on the fifth try!

The two suspects in the San Jose kidnapping of baby Brandon plead no contest, with Yesenia Ramirez facing up to 14 years in prison and Jose Portillo facing up to five years. https://t.co/c7DRjfc8QD pic.twitter.com/mO14Oewdrm

As KRON4 reports, San Jose Police Dept. Officer Eduardo Reyes testified that Ramirez’s true target in the baby scheme was boyfriend Francisco Marquez, who investigators say, according to text messages, seemed to believe Ramirez’s story that he was the father of the child and that Ramirez had given birth.

It’s not clear what Ramirez had told Portillo to get him to go along with the kidnapping plot, but text messages found by investigators suggest that multiple men believed they had fathered children with Ramirez — so she was keeping her options open!

Just to add to the crazy, Ramirez had previously convinced Marquez that she had given birth to twins, who were his. Why had he never met the twins? As KRON4 reports, she wove an elaborate tale involving ICE deporting her while she was pregnant, and when she tried getting back into the U.S. she was in a car accident and fell into a coma. While in a coma, she told Marquez, CPS took custody of the twins and they were adopted by another family.

Ramirez, who is legally married but estranged from her husband, had been in an on-again-off-again dating relationship with Marquez for four years, prosecutors say. Ramirez informed him in March that she had given birth to another infant, whom she named Brandon, and she showed Marquez cellphone photos of the boy. Things escalated when Marquez moved into Ramirez’s home on April 23 and wondered where their child was. Ramirez told him the baby was still in the hospital, and the day before the kidnapping she said she’d be picking up the boy the next day.

At that point, the stakes were high for Ramirez, but she had already purposefully befriended Brandon’s mother, Jessica Ayala, at the same scary Pentecostal church where the pastor and his daughter allegedly killed a three-year-old child in an “exorcism” last year. As the Mercury News reports, Ayala testified that Ramirez had been hovering around her and her mother, Victoria Mejia, with whom she lived. And in March, Ramirez began coming over to their apartment frequently and telling her that God had sent her to help during a “difficult time” — Brandon’s father is reportedly currently in prison.

But prosecutors say the first kidnapping attempt was on March 14, when Portillo and Ramirez went to the apartment when Ayala and Mejia were out, telling other family members that they were with Child Protective Services and needed to take the child with them — the family members made some calls and found there was no so such order pending.

They again allegedly tried to abduct the child during a church service on April 2, and then twice more after that.

Add to all this that prosecutors believe there was a murder plot as well — Ayala found, four days before the kidnapping, that the brake lines on her car were cut, after finding they didn’t work and taking the car to a mechanic.

Both Ramirez and Portillo pleaded no contest on Tuesday to eight charges, including kidnapping, attempted kidnapping, conspiracy, burglary, and vehicle tampering. They were both told they would receive more lenient sentences if they took pleas, and they will now not have to stand trial.

“The court gave indicated sentences to Defendant Ramirez — she pled for a 14-year top offer which means she can be sentenced up to 14 years in prison — and Defendant Portillo pled to a five-year top offer,” said Rebekah Wise, Santa Clara County Deputy District Attorney, speaking to KTVU.

Both had faced maximum terms of 16 years and four months.

The pair is scheduled for sentencing on October 28.