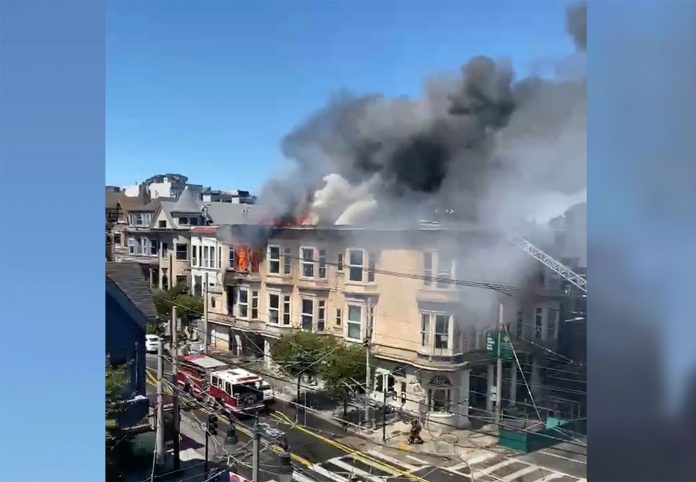 The news copters were out and traffic was being diverted around busy Divisadero Street in San Francisco’s NoPa neighborhood due to a two-alarm apartment fire on McAllister Street.

According to a tweet from the SF Fire Department, the fire is at 1604 McAllister Street, which is the same building that houses Oasis Cafe, the Ethiopian restaurant at 901 Divisadero, and Kava Lounge.

Smoke from the fire could be seen and smelled through multiple parts of the city.

Update: The flames spread to the upper story and the roof of the building, as seen below. The SFFD says no injuries have been reported, but a third alarm has been called and 100 firefighters were reportedly battling the blaze.

#breaking in #sf where 3-alarm fire raging through a Victorian on McAllister. ⁦@SFFDPIO⁩ @kpix pic.twitter.com/08D7zNDcAM

It appeared that traffic was stopped in both directions on Divisadero, with the SFPD assisting in directing and diverting traffic.

Update 2: The fire appeared under control as of 2 p.m., and the SFFD confirmed that there was “no exposure” to other buildings next door.