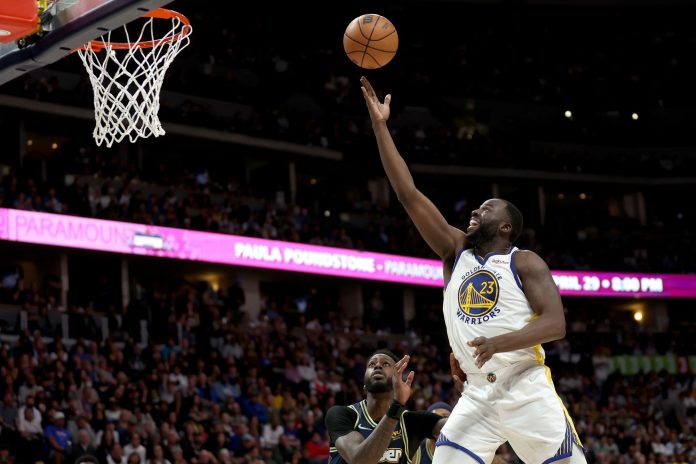 This was almost a story about how the Golden State Warriors swept the Denver Nuggets in four games in round one of the playoffs. This was, in fact, a mere six points away — a free throw here, a field goal there — from being that very story. Warriors’ fans and reporters alike all but expected that headline, and appear to be already spoiled by an impressive Warriors’ start to the playoffs and the promise of perfection.

Truth be told, the Nuggets were more or less in control for the entirety of Game 4 on Sunday, even though the Warriors took the lead late, and seemed, for a moment, like they were simply inevitable and unbeatable in Round One. Refusing to say die, and buoyed by the outstanding performances throughout their lineup, the Nuggets led by as much as 17 yesterday, and averaged a roughly 10- to 12-point lead for most of the game, until the Warriors made a late push.

“The fact that we had a lead with a minute and a half left speaks to who we are — but it was kind of a miracle at that point,” said Stephen Curry at the postgame press conference on Sunday.

The Nuggets won 126-121, avoided the sweep, and forced a Game 5 in San Francisco on Wednesday. Dub Nation was suddenly confronted with the notion that the climb to the NBA mountaintop wont be without a little adversity.

Nikola Jokić had another outstanding game last night, but the rest of the Nuggets stepped up to the moment, as well. (Photo by Matthew Stockman/Getty Images)

The Mercury News said that the Warriors were “too eager and too disjointed to finish the Nuggets,” saying that head coach Steve Kerr Kerr “saw the loss coming.” In an early, first-quarter timeout, Kerr told his soldiers: “It feels to me like we smell blood and we’re trying too hard. We’re going for the kill.” The San Francisco Chronicle wondered what might have been, saying the Warriors missed (nay, squandered) a chance to relax while their next opponents were still grinding it out. “The Warriors knew their reward for completing a first-round sweep of Denver: at least a week between series. Time to rest. Time to recharge. Time to let their next opponent wear itself out, while the Warriors watched from afar.”

It might be easy for Warriors’ reporters, the whiff of a sweep in their nostrils, to forget that Denver — a team playing for pride, and with nothing to lose — had an outstanding game.

“We didn’t want to get swept. I think we didn’t deserve to get swept,” Nikola Jokić said after the game. Once again, the reigning (and presumptive two-time) league MVP was the center of the Nuggets’ offensive universe, scoring 37 points with eight rebounds and six assists. ‘Joker’ shot an astonishing 66.7% from the field, and was 3 of 5 from three. “We were aggressive. I think they felt us the whole game.”

Monté Morris had 24 points on Sunday, effectively doubling his per-game productivity from the first three games of the series; he bottomed a few huge three pointers, and was 5-7 from distance yesterday with five assists. Nah’Shon ‘Bones’ Hyland scored 15, including a flurry of back-to-back-to-back threes in the first half. Aaron Gordon had 21 points — his best performance of the series thus far.

“This isn’t the worst thing for us,” said Draymond Green in the postgame interview on Sunday. “We get more playoff-like reps together. We just got to play better — we gotta go home and take care of our business and close out the game and not come back to Denver.”

“I hate it — it’s the worst feeling in the world, because it’s what I do really well,” Curry said in the postgame press conference. After his fourth free-throw miss, Steph held up four fingers, then grimaced in disbelief at his outstretched hand. It was a Steph Curry brand of frustration: the search for high-level play and perfection with an amused/bemused and stylish shrugging of the shoulders. “I’m glad I got there [to the free-throw line] 14 times, which speaks to how I’m feeling physically, just trying to be aggressive.”

What does perfection look like? Symptoms may include frustration, even when you’ve scored 33 points and have apparently returned to high-level physical condition. Steph Curry shrugs it off yesterday in Denver. (Photo by Matthew Stockman/Getty Images)

Do we, as fans, really expect the Warriors to be perfect? Yes, we do, but only because the Warriors seem to expect it of themselves.

“It’s a good test for us,” Steph said of yesterday’s loss. “We clawed our way back and took the lead. We had a chance to win despite playing some inconsistent basketball. It’s a reminder of how hard it is to win at this level, the importance of every possession, and the things that you can control if you’re trying to get to where you want to go. We’ll see how we respond at home and taking care of those mistakes that we made tonight.”

Klay Thompson looked absolutely dialed in yesterday, scoring 32 points and shooting 12-20 from the field and 7-11 from three. (Photo by Matthew Stockman/Getty Images)

After looking like he might never miss a shot again, Jordan Poole had the “worst” game of his young post-season career, scoring 11 points; he was 3-10 from the field and 1-5 from three, but had 9 assists and three steals. “Game 4 was a reality check for the Warriors’ young guard, and how he responds in Wednesday’s Game 5 will tell us so much about his development as a player and the Warriors’ postseason possibilities,” the Mercury News wrote. The demand for Poole’s roughly 28-point average from his first three playoff games is already sky high.

The Warriors have been universal in their praise of Andrew Wiggins performances against the Nuggets. He had 20 points yesterday, his highest-scoring game thus far, but it has been the “little things that don’t show up on the stat sheet,” that has set Wiggins apart, according to Draymond Green. “Andrew is suited to play a specific role and give us 35 minutes of on-ball defense, and be a support-offensive player knocking down threes and getting some layups in transition,” Green said. (Photo by Matthew Stockman/Getty Images)

In the wake of yesterday’s loss and the realization that Jordan Poole might be human, there have been a barrage of questions about when Steph Curry will return to the starting lineup. (To be fair, these questions have been circulating since Game 1.) “I think I’m going to sit out the first 11 minutes and then play 37 minutes straight — we’ll see how that works,” Curry laughed at yesterday’s press conference.

Game 5, at Chase Center in San Francisco, will be on Wednesday at 7 p.m.