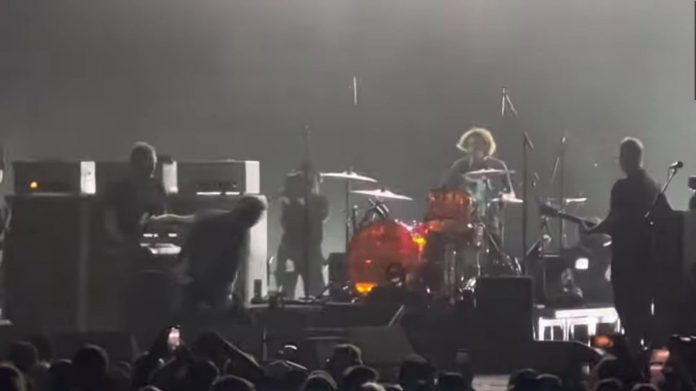 Watch: Adorable Teen From Mill Valley Gets to Play Drums For Pearl Jam in Oakland

A Tamalpais High senior got to jam with Pearl Jam at Saturday night’s Oakland Arena show, and even flowed right in after the band’s drummer tested positive for COVID-19.

Late 1990’s grunge superstars Pearl Jam had to delay their current Gigaton tour by two years because of the COVID-19 pandemic. Once the tour started, as luck would have it, Pearl Jam drummer Matt Cameron tested positive for COVID not even two weeks into the tour. But for Saturday night’s show at the Oakland Arena, their stand-in percussionist provided some Bay Area beats, as the Chronicle reports 18-year-old Tamalpais high senior Kai Neukermans got to play drums for Pearl Jam onstage for their first track “Mind Your Manners.”

“He hasn’t graduated high school yet,” Pearl Jam vocalist Eddie Vedder told the Oakland crowd. But their young drummer Neukermans plays in a metal cover band called The Alive, and Vedder praised them, saying “They’re pretty young for how hard they can play.”

“Everybody this is Kai; Kai this is everybody!” Vedder said, introducing the band’s new teenage drummer. ”We’re ready when you are. You’re leading the band, brother.”

Neukermans is a pretty well-connected young man, and the Chron reports he’s a personal friend of Vedder’s daughter. So when Cameron caught COVID, Neukermans volunteered his services, the band listened to his drumming and took him up on the offer, and off he goes.

Neukermans only performed that first number, he did not play the whole show. But Consequence of Sound reports that another local drummer Josh Arroyo also got to fill in for one song at the Friday night Oakland show. Touring member Josh Klinghoffer and Richard Stuverud are filling in for most of the temporary Pearl Jam drumming duties.

Wow! Our very own Kai Neukermans takes the stage with Pearl Jam on Saturday! 👏👏👏👏https://t.co/7jftQV9nzT

Because of the tight scheduling timeline, the Chronicle reports that “Neukermans had missed a statistics test to get to this moment.” But judging from the tweet above from Tamalpais High School, it doesn’t seem like he’s in trouble with the school district administration.