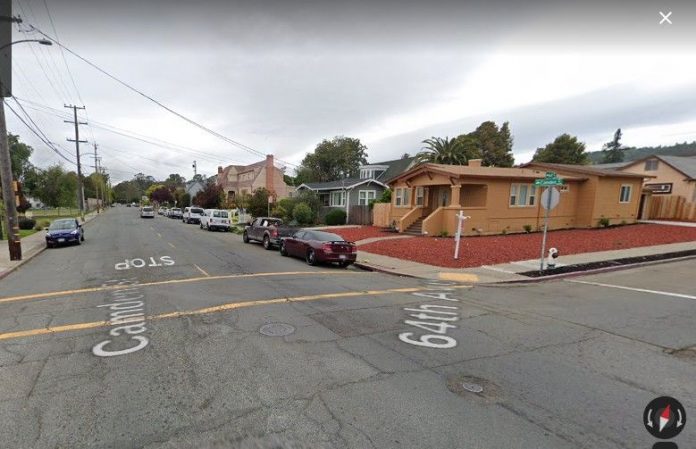 A seemingly random shooting with no apparent motive killed one teen and left another hospitalized early Thursday night in Oakland’s Frick neighborhood.

A visit from two teens to their grandfather’s house went almost as tragically as possible Thursday night in southeast Oakland, about a quarter-mile from Mills College. Two teens were shot and one was killed at about 6 p.m. on Thursday night, according to KTVU. The station reports 16-year-old Hayward High School student  ‘Keyez’ Brooks died on the scene from his gunshot wounds. His yet-unnamed 18-year-old cousin was taken to a hospital and remains in critical but stable condition.

Oakland Police Chief LeRonne Armstrong spoke to media in the video above, right at the scene of the crime at 64th Avenue and Camden Street in the Frick neighborhood.

“Obviously when you have a 16-year-old child that is gunned down in broad daylight, it is alarming, it is concerning, and it’s hurtful,” Armstrong told reporters. “It’s hurtful to this community. Obviously emotions are high. The family is distraught.”

When asked if there were motives or suspects, Armstrong said, “Not one. Not ones that we can put out at this time.” He added, “We know that it was a high-powered rifle that was shot. We know that this was in broad daylight. And we know that people saw what happened out here.”

Some eyewitnesses did lend KTVU a few details, albeit anonymously. They described the vehicle as “possibly a black Acura with tinted windows,” and that a gunman in the car fired “six or seven shots, before the car sped off.”

“If [the victim Brooks] wanted to run, he wouldn’t even have been able to run due to the fact that it was the fence, or the school was there,” one witness told KTVU. “So really he was like just a sitting duck.”

That would be the Spectrum Center School, and in a morbid detail (as seen in Chief Armstrong’s video), Evergreen Cemetery is on the other side of the street.