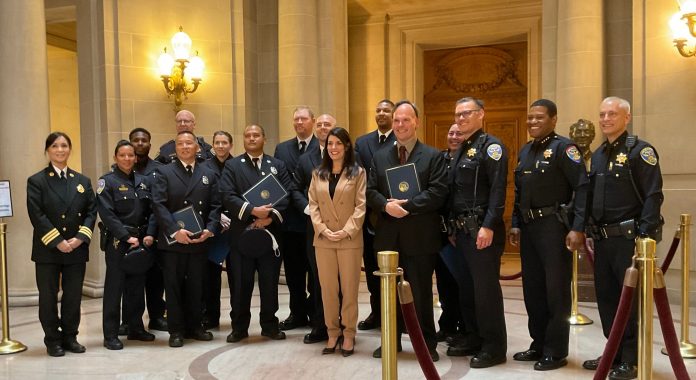 A wild week at the SFPD is capped off by their union president resigning, with claims of improper use of a union-issued vehicle and a credit card, though internal emails indicate cops may have wanted him out.

We must begin this article by once again pointing out again that the SF Police Department and the SF Police Officers Association are two separate entities; one is the actual SFPD, the other is the SFPD’s union, except police use terms like “officers association” or “fraternal order” instead of “union,” so that way right-wingers won’t hate them the way they hate every other union in America.

Montoya resigned after rumors surfaced that he took a union vehicle with him in January when he moved to Nevada—and used a POA credit card to fill up the tank.https://t.co/nKqoP2XkU7

And after a rather eventful week for the police union that saw the recall of their arch-enemy DA Chesa Boudin and a retroactive wage raise dated back to July 2020, the SF Standard now reports that SF Police Officers Association president Tony Montoya has resigned (and may have been pushed) “over claims that he misused association funds while on medical leave.”

Per the Standard’s description of events: “Montoya resigned after rumors surfaced that he took a union vehicle with him in January when he moved to Nevada—and used a POA credit card to fill up the tank.”

Montoya defends those decisions as on-the-level union conduct. “These are very serious allegations and if they were occurring someone should have made a police report,” he told the SF Standard. “That never occurred.”

The head of S.F.'s top police union resigned this week amid a report he used a union vehicle and credit card to drive to his home in Nevada, possibly foretelling a shift in direction for the labor group as the city prepares to get a new district attorney.https://t.co/cXMhShwBQV

New acting president Tracy McCray (who sure loves going on Fox News) sounded a neutral note, telling the Chronicle, “The issues have been settled and no findings of impropriety have been found to have occurred.”

Bot that’s not the tone you saw in internal emails obtained by the SF Standard. “I’ve gotten a lot of feedback thus far on the issue and not a single Tenderloin officer has voiced any support for Tony,” Tenderloin Station rep Joe Clark said in a POA email. “Between the Chesa recall being successful, Tony stepping down from the presidency and the BOS almost unanimously approving extra money for us, it’s looking like the pendulum is starting to swing back in our favor after a very long past 4-5 years.”

Clark also speculated “next big dominos to watch fall,” included “the possibility of a new chief in the next fiscal year.”

I’ve seen social media posts indicating SFPD Chief Bill Scott is not popular with the rank-and-file of the force, but here we have an internal email from a fairly high-up officer calling him a domino to “watch fall.” It will be very interesting to see if Breed’s new appointed DA ousts Scott to curry favor with the force, or holds a united front with the mayor and Chief Scott to quell these now-emboldened officers.

It's a bird! It’s a plane! It’s San Francisco’s newest hardcore crime fighter: Chesa Boudin! Boudin's recent performance on CNN in front of a national audience pretending that he has made any effort to address San Francisco’s crime problems is absurd.https://t.co/g3RUpprfwA pic.twitter.com/sXMJ7XH2AA

This is not the first financial scandal at this particular union. It was not mentioned enough during the recent cops at Pride dustup that back in 2015, an officer allegedly embezzled $16,000 from the SFPD Pride Alliance. I don’t see teacher’s unions or International Brotherhoods of Electrical Workers having these kinds of scandals once, let alone repeatedly.

And as seen in the tweet above, and in some really tasteless behaviors in the past, the SFPOA seems more comfortable being publicly combative and unprofessional than any other union I can name. Then again, maybe it works  — because that way their union can afford to issue nice cars to leadership, and have $16,000 Pride slush funds.