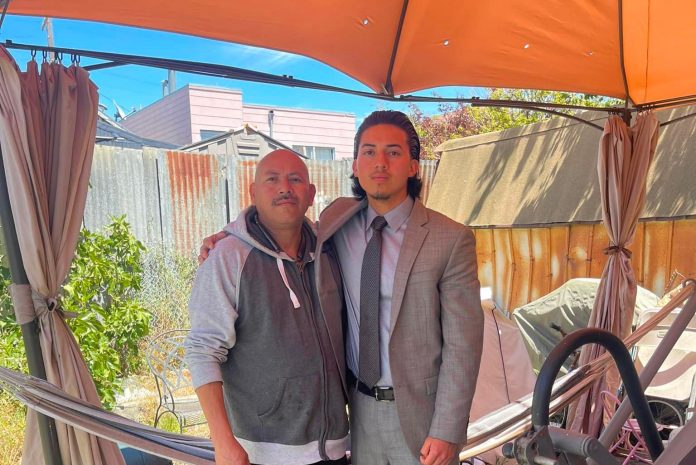 A 23-year-old man who was arrested last weekend for the double murder of his father and stepmother inside a home in San Francisco’s Bayview district has given a jailhouse confession to a local TV station — but says he will plead not guilty to premeditated murder.

It’s not clear why Irvin Hernandez Flores wanted to talk to KTVU about last Saturday’s shooting, but in an interview with the station Thursday he was apologetic to family members and explained that he was very intoxicated at the time of the shooting and does not entirely remember all of the details.

The killings happened around 3 a.m. Saturday in a home on the 1100 block of Ingerson Avenue. Hernandez Flores is accused of fatally shooting his father, 47-year-old Jose Hernandez, and his stepmother, 41-year-old Yessenia Soto Hernandez in front of his 11-year-old half sister. As the Chronicle and others are reporting via charging documents from the SF District Attorney’s Offie, Hernandez Flores then live-streamed the gruesome crime scene on Facebook.

“In this video, the defendant appears proud and happy with himself, all while you can clearly see his father laying in a pool of blood, and his step-mother slowly dying from her multiple gunshot wounds,” said DA’s Office spokesperson Randy Quezada, speaking to the Chronicle. “These were crimes that were clearly premeditated.”

Hernandez Flores tells KTVU that he did not go to his father’s home with the intention of killing him, but that he went into his father and stepmother’s bedroom while they were sleeping while carrying a gun.

When KTVU’s Amber Lee asked him why he had the gun on him, he only said, “I don’t remember much, but that gun was legally mine.”

Hernandez Flores says his father woke up and charged at him, and that was when he shot him. He said he had no intention of harming his stepmother, but that she was caught in the crossfire.

He also admits to shooting his father on the ground after turning the lights on in the room. “Once I emptied the clip I turned on the lights and I see him on the floor. I see his suffering and then I stopped his suffering,” he said, implying that he had to reload the weapon.

The live-streamed video, Hernandez Flores says, may have been his effort to say goodbye to family members, knowing he would likely be going to prison for a long time — but he says he does not remember what he said in the video.

Hernandez Flores further explains his 11-year-old half sister was in shock at seeing the scene, and that he helped her to call 911.

On the one hand, Hernandez Flores expresses remorse and claims not to have gone to the home with murderous intent. But on the other, he admits to heavy drinking beforehand, and to having anger at his father after a recent accusation of past sexual abuse from another relative.

“I want to apologize. I didn’t entirely want to do this,” Hernandez Flores tells KTVU. “Our heavenly father knows I didn’t do this with the intent to kill my father —especially my sister’s mom who had nothing to do with this.”

A recently discharged Marine, Hernandez Flores tells KTVU that he had plans to work for the SFPD and to join the SWAT team as a sniper.

“All my life I wanted to do good for my family, but my father, he killed my dreams,” he says.

At this point Hernandez Flores seems to only want to dispute the premeditation aspect of his crimes, and he says he will plead not guilty to premeditated murder. He is scheduled to be arraigned on August 25 on charges of murder, second-degree burglary, and child endangerment.

Previously: 23-Year-Old Man Arrested In Double-Homicide of Relatives In Bayview

Top image: Jose Hernandez and Irvin Hernandez Flores in a May photo from Facebook.