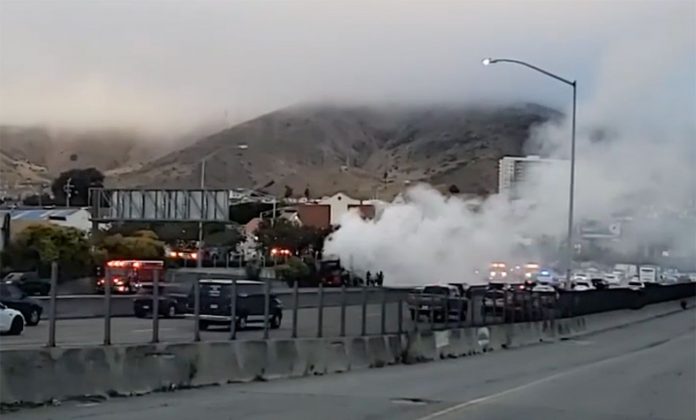 A Double-Decker Sightseeing Bus Caught Fire and the Driver Disappeared

A double-decker tour bus went up in flames Wednesday night, apparently while traveling south on 101 out of the city, and when CHP arrived on the scene the driver was nowhere to be found.

The fire was reported near the Grand Avenue exit in South San Francisco around 7:30 p.m. Wednesday. As KRON4 reports, the incident caused a serious traffic backup on southbound 101, first as flames were being extinguished, and then as two of the four lanes of the freeway were blocked.

Northbound lanes were also temporarily blocked by a CHP vehicle while the smoke was still heavy across the roadway.

No one was injured in the fire, and the bus had no passengers at the time, but CHP was curious as to why the driver did not remain at the scene until someone arrived.

As KTVU reports, the owner of the tour bus company, Maneet Sohal, says the driver was “completely safe” and had just decided to walk back to the tow yard about a half mile away.

The cause of the fire remains unclear.

This was one of the big, red, double-decker buses that are often seen around San Francisco and are banned in some neighborhoods like Alamo Square as a nuisance, with the “Hop on Hop Off” logo on the side. The bus was part of San Francisco Deluxe Sightseeing Tours.

A video from the Citizen app shows the bus in flames, and the large traffic backup forming.