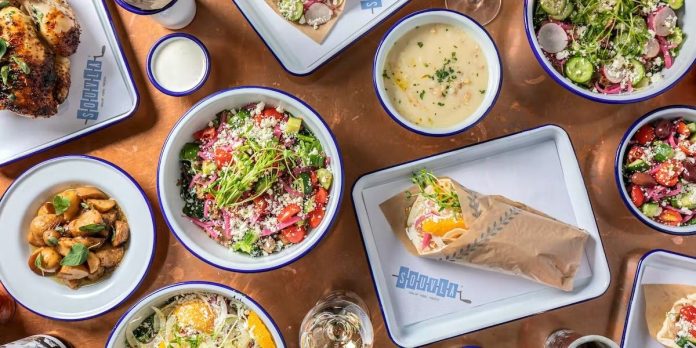 A New Souvla is Opening in Dogpatch Next Week, in the Former Magnolia Brewery Space

The Greek wrap, salad, and froyo sensation Souvla is expanding its cult-hit San Francisco footprint, with a new Dogpatch location opening next week featuring new small plates and an expanded Greek wine list in addition to the Souvla menu you’ve come to know and love.

In the eight years since opening its first Hayes Valley location, Greek food favorite Souvla has become a sort of poorer-person’s version of Kokkari Estiatorio, with a more fast-casual menu and fewer Kardashians. Souvla’s wraps and salads have since expanded to outposts on Divisadero, Valencia Street, and the Marina, winning the love of Gwyneth Paltrow’s Goop, and even a high-flying expansion onto the Delta Airlines menu.

Souvla Dogpatch will serve a new list of hot and cold Greek meze, plus an expanded list of Greek wines. https://t.co/UrvOB0CnpM

And it was barely a month after the closure of Magnolia Brewery’s Dogpatch location that we learned the Souvla would take over that space for their fourth SF location, and fifth overall in the Bay Area. And now Eater SF reports the new Dogpatch Souvla will open next week, on Tuesday, August 16, at 2505 Third Street (at 22nd Street).

That Eater SF piece has plenty of sweet shots of the new interior and the expanded menu items. Many of these can also be seen in the fun musical video above. This new Dopatch location will offer the same beloved Souvla menu, but also an additional new Greek meze (small plates) menu, that Eater SF reports “offers 10 items including chilled octopus salad; dakos, a traditional salad from Crete; pan-seared saganaki; and dolmades.”

Per Eater SF and Souvla founder and CEO Charles Bililies, Souvla Dogpatch is now “the first restaurant in the U.S. to serve an all-Greek beverage list,” right down to the sodas and sparkling waters. But the wines are obviously the headliner of that beverage list, which is expanded, and includes their house-branded Greek red, wine, and rosé.

And we’re putting a screenshot above from that Instagram video of what we believe will be their culinary cause célèbre; a whole rotisserie chicken ($33) that has existed as an off-menu, secret to-go item at the other locations, but will be a full-fledged sit-down item at Souvla Dogpatch.

Related: Souvla Is Taking Over Magnolia Brewery Space In Dogpatch, Will Open Largest Restaurant Yet In June [SFist]