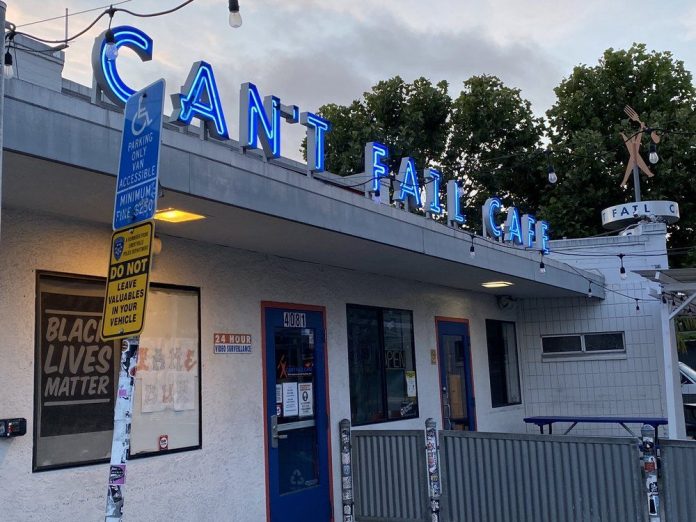 Not two days after Green Day played at Outside Lands, we have more Green Day-related news, but it will not go down well. The popular, 20-year-old Emeryville diner Rudy’s Can’t Fail Cafe announced its sudden, permanent closure on Monday morning, according to SFGate. As the many heartbroken obituaries on social media note, the restaurant counted Green Day bassist Mike Dirnt as a co-owner, a likely factor contributing to its being featured on Guy Fieri’s Diners, Drive-Ins and Dives. The restaurant opened in 2002.

“With a heavy heart, the ownership of Rudy’s Can’t Fail Cafe has decided to permanently close operations effective immediately,” the diner said in a Monday morning Instagram post. “Many thanks to all our customers for your patronage and support over the years, we will miss serving your preferred Brew For Breakfast and Late Night Munchies.”

Later on Monday morning, the restaurant posted the tearjerker nostalgic montage video seen above, set of course to Green Day’s “Good Riddance (Time of Your Life).”

This is not the Uptown Oakland location of Rudy’s Can’t Fail Cafe — that location, attached to the Fox Theater, closed in July 2018. But this was the original Emeryville diner that had been there for 20 years, named for the 1979 Clash song “Rudie Can’t Fail,” which lionized “drinking brew for breakfast,” something that you could, in fact, do at Rudy’s Can’t Fail Cafe.

The diner did not announce their reasons for closure, but it does appear there were economic factors at play. According to Emeryville publication The E’Ville Eye, “Rudy’s 20 year lease came to an end last year but received a year extension to help them recover and evaluate their long-term future post-pandemic. They also received a temporary rent reduction to assist them during a particularly difficult time for the food service industry.”

“The price of food and labor during this span continued to skyrocket making their business unsustainable,” that site added.

Related: One of San Francisco’s Oldest Restaurants, Alioto’s, Is Closing After a Century at Fisherman’s Wharf [SFist]