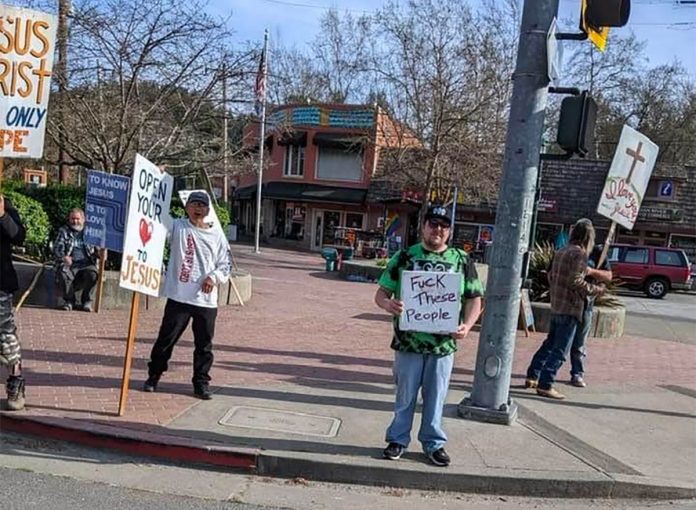 For reasons that can probably only be explained in the dank, repressive corners of conservative social media, a group of anti-gay, quasi-religious protesters have returned again and again to the same low-profile, lesbian-owned pizza shop in Guerneville. But the pizza place and its fans rallied with counter-protests, and for now it seems they’ve finally shooed away the Christian gadflies.

The group, carrying signs that say things like “The Bible says go and sin no more,” first began appearing in 2019, and the owner of Smart Pizza, Suzy Kuhr, has no idea why they targeted her shop — especially when there are many gay-owned businesses in town.

“There’s no room for hate here,” Kuhr told the Press Democrat back in March, when the group began returning regularly with their signs. “There’s no need for it.”

The protesters, who often were just a half dozen or so in number, hailed from Oakland, San Francisco, Mendocino, and Humboldt County, and appeared to be a loosely affiliated band of zealots who specifically want to target LGBTQ communities — a la the infamous Westboro Baptist Church, whom the Southern Poverty Law Center labeled as “arguably the most obnoxious and rabid hate group in America,” and who have thankfully gone quiet in recent years after the 2014 death of leader Fred Phelps.

One of the demonstrators, Loi Nguyen of San Francisco, told the Press Democrat in March that they were in Guerneville to spread “God’s message.” And he said that after demonstrating in SF and at UC Berkeley, they had lately decided to focus on Guerneville because of the “foot traffic.”

The choice of the plaza in front of the pizza shop may have been less about the pizza shop itself than about the stoplight intersection — the only one in town — where they could have visibility both to tourists on foot and passing cars.

Kuhr, who’s owned Smart Pizza for six years but worked there over 20, said that the demonstrators had made infrequent appearances going back about three years, but they were suddenly around a lot starting in February. And that was when one of her employees, Louis Britton, decided to use a pizza box to write his own message of counter-protest and stand out in the plaza with them. It said, simply, “Fuck These People.”

That first sign led to more, and customers and fans began coming in and writing their own messages on pizza boxes. Kuhr wrote her own that says, “Jesus Loves Me and My Girlfriend Too,” and others said “God Is Gay” and “No More Bullies.” The so-called “Pizza Box Brigade” then began regularly seeing volunteers take their signs of counter-protest to stand among the Jesus people — not unlike counter-protesters have had to do when the Westboro Baptist people showed up at the funerals of slain gay men, bringing angel wings and flags to block them from view.

We’ve not been going out much for the last few years for some reason, but this story inspires me to drive to Guerneville for some pizza.
Maybe Sunday.

‘No Hate’: Anti-gay protesters met by counterprotesters in Guerneville https://t.co/q5JBMJ4eFx

Shop and property owners in the Sonoma County community of Guerneville form a “Pizza Box Brigade” to oppose demonstrators in front of Smart Pizza. https://t.co/cmbn5d627D

Anti-gay protestors gathering in the Guerneville plaza are being met by counter-protestors, some which call themselves “the pizza brigade” and hold up pizza boxes with sayings like “Love is love.” pic.twitter.com/nvup5A3hR0

Now, as Britton and Kuhr tell KPIX, the protesters have gone another hiatus, and they haven’t been around recently.

“I’m the father of someone who identifies as a member of the LGBTQ community, and I feel it’s very important that they know that people stand with them,” Britton tells the station.

Britton says the demonstrators themselves were fairly “abrasive,” and when he started his counter-protests they called him a homosexual and a Satan-worshipper, and told him he was going to burn in hell. He also quipped that they called him a “dope smoker and all these other crazy, half-true things.”

Nearby property owner Jake Hamlin called the protesters “invaders,” and told the North Bay Business Times, “This was so foreign to us — to have some people come in and try to put us down for things this little town is so proud of.”

“It’s just nice that people come in and say, ‘We support you.'” Kuhr told KPIX.

As she told the North Bay Business Times two weeks ago, the whole experience and the attention from the counter-protest has actually brought in more business.

“I was born and raised in Nebraska, and I’m 64,” Kuhr said. “You just didn’t speak up there, especially back then. It means so much more now. I’m proud to be in this business community. There was an 85-year-old woman standing out there with a rainbow flag.”

Kuhr also said that there was a woman who came into the shop who said she’d driven there from Colorado after hearing about the protest, because she has a gay son.

“To me, this is what pride is about,” Kuhr tells the Business Times.