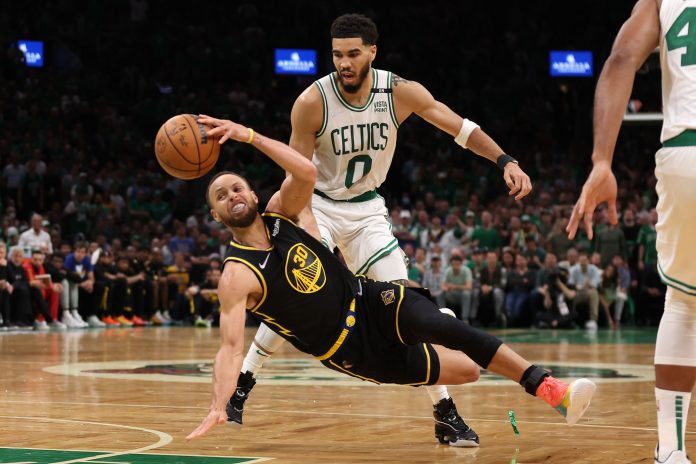 A Strong Celtics Performance in the Paint, a Feisty Crowd and a Scary-Looking Pile-Up on Stephen Curry: Boston Takes Game 3, 2-1 Finals Lead

Klay Thomspson got his groove back, and Steph Curry was Steph Curry. But Boston’s lineup was equally in form, this time seeing strong performances from Jason Tatum and Jaylen Brown, as well as a supporting cast including Marcus Smart, Grant Williams and Al Horford. Boston had their way with the Warriors on the boards and in the paint, and the Celtics were up by as much as 18, then down by a few points briefly in the third quarter, before they took over again in the fourth. Boston’s superior size, youth, and athleticism seemed no match last night for Golden State’s smaller veteran lineup.

The sky is definitely closing in a little, as every game, quarter and possession becomes more and more critical in the final ascent to the mountaintop.

Jason Tatum led the Celtics in scoring on Wednesday with 26 points, 6 rebounds and 9 assists, but Stephen Curry led all scorers with 31 points. Curry has made five-plus threes in all three games of the Finals thus far, and is the only player in Finals history to have that kind of streak multiple times in his career. Steph would probably be the first person to say that all the threes in the world don’t matter without the win. (Photo by Maddie Meyer/Getty Images)

If you’re a Boston fan, last night was almost a perfect game.

If you’re a Warriors’ fan, you’re probably feeling a little nervous right about now, and wondering about the health of one Stephen Curry, who was involved in yet another rugby-like scrum while scrambling for a lose ball, finding himself on the bottom of a pile of green and white, then coming up screaming, then limping — but staying in the game for the short term. The play had shades of similarity to the March 16 game against the Celtics, when Curry and Marcus Smart got tangled up, and Steph would miss exactly one month/the remainder of the regular season.

“How are you feeling?” Curry was asked at the postgame press conference. Nonchalantly, almost shrugging, he said, “Ah, I’ll be alright. I got caught underneath Al [Horford]. Obviously, there’ll be some pain, but I’ll be alright, figure out how it feels tomorrow, and get ready for Friday.” Curry said that it was “the same thing I did against Boston in the regular season, but not as bad.”

“So a foot sprain essentially?” asked one reporter.

“That’s what it felt like, and then I’ll see how it responds. So… not much to say. I don’t feel like I’ll miss a game, though.”

“The Golden State Warriors are optimistic about guard Stephen Curry’s status for Game 4 of the NBA Finals, a league source confirmed,” the San Francisco Chronicle reported Thursday. “Curry is not expected to need an MRI and will be in practice today with the expectation he’ll play Friday at TD Garden, the source said.”

We will wait and see.

Klay Thompson levitated above the noise and speculation on Wednesday, and looked in fine form. Was it the start of some momentum from number 11? (Photo by Elsa/Getty Images)

After missing his first few shots, Klay Thompson went on to have a solid game, scoring 25 and shooting 7-17 from the field and 5-13 from three. Andrew Wiggins continued with his steady, reliable playoff form with 18 points and 7 rebounds. Otto Porter Jr. played 21 minutes off the bench, had 4 assists, and hit a few ultra-timely three pointers — including a difficult buzzer-beater. Jordan Poole had 10 points.

“Tonight may have been one of the worst games of my career,” said Draymond Green on his podcast. “I let too much noise get into my head. I let that drag my intensity level down.” (The noise has been at its loudest as the NBA season climaxes.)

Green, who fouled out of last night’s game, said that he was worried about bringing his signature scrappiness to the floor for fear of racking up another technical foul. “I didn’t attack — I mean offensively and defensively,” Draymond said.

Andrew Wiggins has been rocksteady since April, and had success getting into the paint last night. (Photo by Pool – Kyle Terada/USA TODAY Sports/2022 Getty Images)

Sometimes sports are way simpler than you think.

Regarding any Game-3-to-Game-4 adjustments, Draymond said, “Once you get to the NBA Finals, there are no big adjustments.” But Green admitted that Jason Tatum and Jaylen Brown were getting into the paint and breaking the Warriors D. “Our defense at the point of attack has to be a lot better,” Draymond said.

The Celtics out-rebound the Warriors 47-31, and seemed to have found a different gear on the glass. Robert Williams III, who is 6′ 9″ but seems like he’s well over 7-feet tall, had 10 rebounds, four blocks and 8 points last night. Disparities in height and athleticism had not been a part of the storyline in the Finals thus far, until last night.

Bodies were flying, tempers were flaring, whistles were blowing, and that signature Boston hospitality was on display on Wednesday. (Photo by Maddie Meyer/Getty Images)

A few times during last night’s game, the chant from the Boston crowd sounded something like, “Good LUCK, Draymond!” Wow, how polite of the Bean Town-crowd!

“By the way, my name don’t even rhyme with that whole chant,” Draymond said on his podcast, noting that there are too many syllables in his name to properly accommodate the four-letter, rhymes-with-“luck” word used by the crowd. “Shout out to my mom for the name — it’s beneficial for me in this case,” Green said.

When asked if the crowd affected the game, Klay Thompson said, “It was not a factor. We’ve played in front of rude people before, droppin’ F-bombs with children in the crowd. Real classy. Good job Boston.” (I would love to be self-righteous here and claim that we, as Californians, are just better people than our East Coast-counterparts. [Full disclosure: I lived near Boston for five years.] But Warriors’ fans famously trolled Charles Barkley on live TV, so yeah.)

Well, we’ve had double-middle fingers from Draymond in Memphis, we’ve Whooped that Trick, and we suffered through an indoor rain delay in Dallas. At the final stage of this trek up the mountain are some of the most cantankerous fans in the country. Bring. It. On. (Photo by Elsa/Getty Images)

If the NBA championship is the mountaintop, then the Golden State Warriors are attempting to ascend the steepest, most treacherous slope beneath the peak. The footholds are becoming skimpier, the oxygen thinner and the ice slicker. The Dubs are hanging in there, but are being tested like they have not yet been this playoff season.

But the Warriors have been here before in previous year’s runs.

“Getting big 2015 vibes,” Klay Thompson said, referring to that year’s Finals against the Cleveland Cavilers, who took a 2-1 lead over the Warriors when the series shifted to Ohio. “We’re not going to overreact,” Thompson said. “We’ve been in this situation before.”