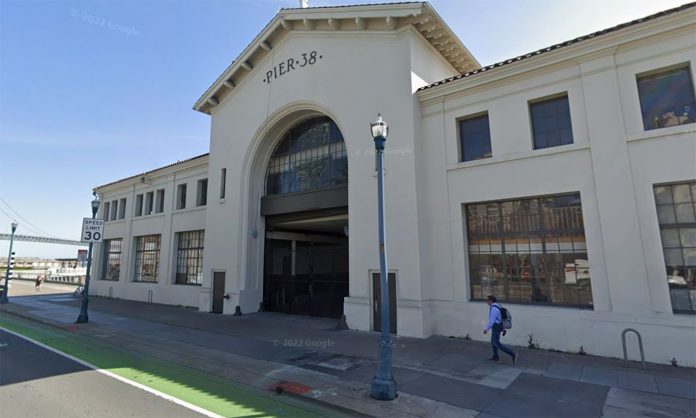 Another Plan For a Rundown SF Pier Emerges With Another Floating Pool, Plus a Food Hall

Developers continue eyeing the sometimes vacant and mostly underutilized Port of SF properties along the Embarcadero, hoping to redevelop them into more active — and profitable — uses. But a host of regulations and legal obstacles make it an uphill climb.

This week we learn of a new proposal in the works for Piers 38-40, near Oracle Park. The piers are currently home to a surface parking lot and a couple of historic pier sheds, as well as maritime businesses North Beach Canvas, City Kayak, and Cal Marine Electronics.

Pacific Waterfront Partners, led by Australian-born developer Simon Snellgrove, are looking to turn the property into more of a daytime and evening draw for tourists and local families alike, with the addition of new office space to drive revenue. Snellgrove explains to the Chronicle that the plans are still in flux, but ideas currently include a floating pool and/or a volleyball court, berthing space for ferries, water taxis, and privately owned boats, and an “international food market” with eight micro-eateries or food stalls, along the lines of La Cocina Municipal Marketplace.

The floating pool idea was already floated, if you will, by developers Strada-TCC for Piers 30-32, an even more ambitious project that includes a seawall lot across the Embarcadero — the one currently home to that once-controversial Navigation Center for the homeless. That plan includes a proposed 850 residential units on the seawall lot, as well as a paddle-in water park of sorts, three acres of public open space, and 376,000 square feet of office space.

But that plan, which was selected by the Port of SF to move forward in an RFP process, is already facing snags — one of the biggest of which is a question of whether office uses are even allowed on Port property. As the Business Times reported last month, that’s still an open question, and the answer will clearly impact Snellgrove’s plans for Piers 38-40 as well.

Snellgrove’s firm was behind the restoration and reuse of Piers 1½, 3 and 5 next to the Ferry Building, a project that was completed almost 20 years ago. And the company was also behind the controversial 8 Washington residential development, which was the impetus for the “No Wall on the Waterfront” opposition campaign that got a 2014 ballot measure passed imposing height limits on Port land.

As he tells the Chronicle, he hopes that his firm’s proposal for Piers 38-40 passes muster because of their plans to address sea-level rise and raise the whole pier up four feet. Snellgrove is also looking to sell the project to the public by partnering with a construction management firm, the Cornerstone Institute for Anointing, which focuses on hiring minority-owned businesses and promoting “self-sustainability in the lives of youths, adults, displaced workers, military veterans, women and other people who are often underrepresented in the workplace.”

Cornerstone CEO Wayne Perry tells the Chronicle, “I do think this the politics [on this project] line up pretty well this time. Who doesn’t want a project that is going to deal with sea level resiliency? Who doesn’t want to create opportunities for residents of San Francisco?”