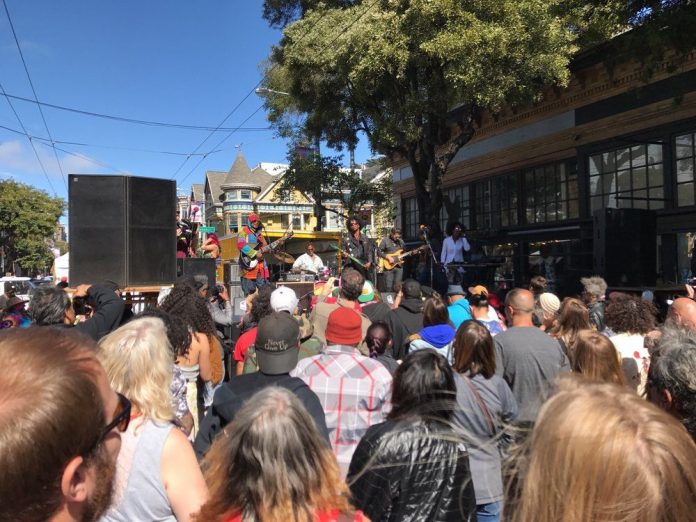 The Haight-Ashbury Street Fair will not wear flowers in its hair as scheduled next Sunday, June 12, but organizers say they are “aiming for the end of the summer” with a replacement date.

Well, as luck would have it, just hours after SFist published our comprehensive list of free street fairs and festivals for the summer and fall of 2022, one of the biggest and longest-running events on that list announced that their 2022 event will not be held as originally scheduled. At around 5 p.m. Thursday night, organizers of the annual Haight-Ashbury Street Fair announced that the “The 43rd annual Haight Ashbury Street Fair will be postponed.”

The street fair was schedule for next Sunday, June 12, so the announcement comes just ten days before the scheduled event.

Organizers provided SFist with the above graphic announcement. “The 43rd annual Haight Ashbury Street Fair will be postponed until later this year,” according to the announcement. “With the hiatus over the last couple of years many logistics have shifted, we strive to bring the best experience to the neighborhood and community and want to ensure we deliver.”

The statement adds that “The date will be announced soon, we are aiming for the end of this summer.” In a separate statement to SFist, organizers said they “should have a date shortly.” So this does not appear to be a Gilroy Garlic Festival situation where the event is unlikely to ever happen again, but instead some logistical monkey wrench that made organizers unable to hold the event next weekend.

I've been looking at this famous Jim Marshall pic of the Grateful Dead playing the Haight Street Fair on March 3, 1968 for 50+ years. My attention is inevitably drawn to the attractive blonde girl with mouth agape at the front of the stage. I've wondered who she is for decades. pic.twitter.com/zyMO3SbqdN

And historically, it is not written in stone that the Haight-Ashbury Street Fair has to be the second weekend in June. The first “Haight Street Fair” was the March 3, 1968 concert seen above, a city-sanctioned event where they shut down Haight Street and let the Grateful Dead jam in the back of a flatbed truck. (There were a lot more people there than the photo indicates.)  The day was informally called the “Haight Street Fair,” and it was meant as a one-time deal.

The first official Haight-Ashbury Street Fair was ten years later, on April 30, 1978. Then-supervisor Harvey Milk was one of the co-organizers, a mere seven months before he was killed. The fair moved to the second weekend of June in subsequent years, eventually attracting headliners like Jefferson Starship/Airplane, The Tubes, and Metallica.

Just for kicks, check out the above video of Bob Weir appearing at the 1985 Haight-Ashbury Street Fair. It’s actually a Merl Saunders & Friends concert, but Bobby appears in a pink polo shirt at the 1:06:40 mark to close out the show with the finale “Johnny B. Goode.” And yes, you can actually see the old Haight and Stanyan McDonald’s behind Bobby and the band.

This is not the first hiccup in the 2022 street fair calendar. The How Weird Street Fair also did not happen this year, and that was a full cancellation, with less explanation. Whether its supply-chain issues, City Hall permitting lags, or some other variable, there are factors holding back street festivals this year in a way that attendees may find to just not be fair.