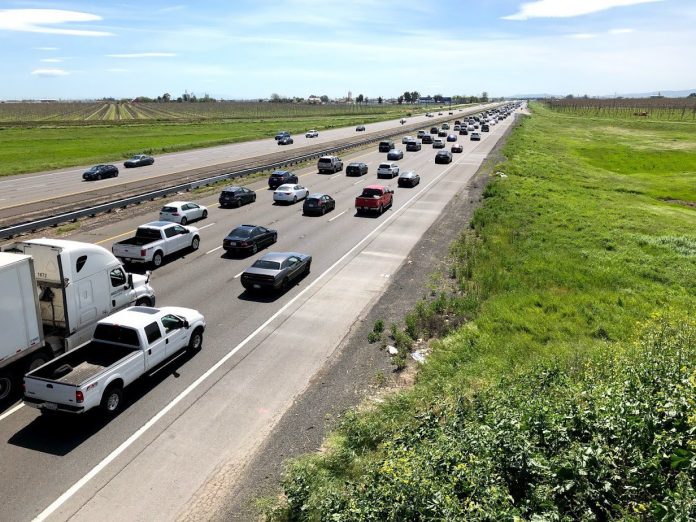 Caltrans Worker Killed in Hit-and-Run on I-80 Near Vacaville, Traffic Backed Up for Hours

A yet-unidentified Caltrans employee was killed in the line of duty by a hit-and-run driver Friday morning some three miles west of Vacaville, and lanes of traffic are just beginning to reopen late Friday afternoon.

A Caltrans worker was killed on the job Friday morning in a hit-and run accident on Interstate 80. KPIX reports that the fatal accident was three miles west of Vacaville, “near the Cherry Glen Road on-ramp along westbound I-80.”

The above report from Sacrmenato’s KOVR was shot while the body was still on the highway, so there’s only so much they can show. That segment was shot for the 12 Noon news, and westbound traffic only backed up more in the hours to follow.

According to KOVR, highway patrol officers say the driver did drive away from the scene after hitting the Caltrans employee. That driver was quickly apprehended and is in custody, but neither the driver nor the victim’s name has been released yet.

Two lanes of westbound traffic were closed off for several hours, leading to traffic backups as far away as Dixon. Those lanes were reopened by 3:30 p.m. Friday afternoon.

Per KOVR, there “have been 189 employees killed while on the job along California roadways since 1921.” Just last month, the Bay Area News Group ran a memorial series dedicated to those 189 workers.

Facebook
Twitter
Pinterest
WhatsApp
Previous articleAnother Plan For a Rundown SF Pier Emerges With Another Floating Pool, Plus a Food Hall
Next articleDay Around the Bay: Tomorrow Is Muni Heritage Day, FYI