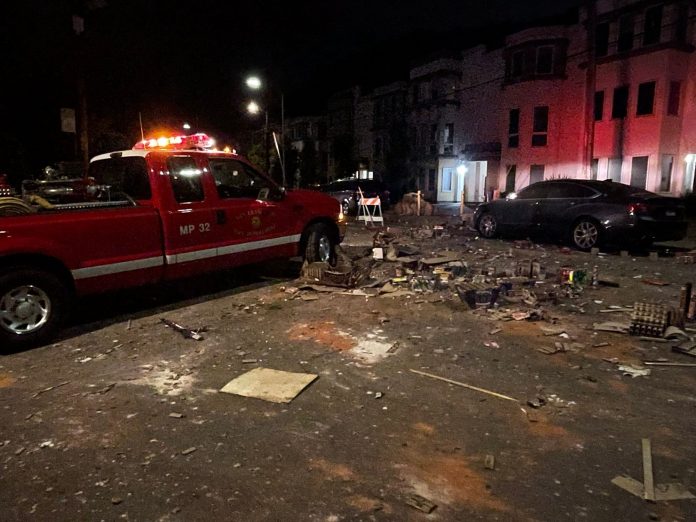 Hundreds of fires caused by illegal fireworks (and illegal bonfires in the middle of streets) peppered the entire Bay Area Monday night, leading to some very busy firefighters across the region.

Monday July 4’s 5 p.m. grass fire on Twin Peaks was an unsurprising sign of things to come for the remainder of Monday evening, as it was quite likely caused by illegal fireworks, and fire departments across the Bay Area spent the evening fighting hundreds of fireworks-related fires, according to NBC Bay Area.

And while every California city and county had their work cut out for them, with scary elevated wildfire risk conditions, one San Francisco incident stood out and will probably bring some forthcoming  recriminations.

The San Francisco Fire Department details their night of work above, and if you scroll through the SFFD Twitter account, Monday’s posts are basically a non-stop parade of  “OUTSIDE FIRE [Name of street corner here] UNITS RESPONDING, AVOID AREA.”

On 7/5/22 at 0039 hrs, @SFPDMission officers responded to a large crowd & fire at 24th/Harrison. Officers attempted to disperse the hostile crowd. Fireworks and glass bottles were thrown at officers. 12 officers were injured as a result. @SFPD #sfpd #sanfrancisco #missiondistrict pic.twitter.com/6ea0xLLRgE

But one incident at about 12:30 a.m. Tuesday morning, at 24th and Harrison Streets, sure appears to have gotten a little riot-y. “Officers attempted to disperse the hostile crowd. Fireworks and glass bottles were thrown at officers,” the SFPD Mission Station tweeted. “12 officers were injured as a result.”

As we reported earlier, officers were soon able to disperse the crowd, and the SFFD arrived to extinguish the bonfire. Tuesday morning’s SFPD Daily Crime summary does not show any arrests for fireworks or assaulting officers, but there certainly were a number of robberies in the surrounding area last Monday night and early Tuesday morning.

You’ll notice they had a busy night in Oakland as well, as the Oakland Fire Department tweeted just after midnight that “5 vegetation fires since 5PM were caused by illegal firework activity,” and “We anticipate a long night ahead and we’re ready.” Oakland Fire Department Chief Dr. Reginald Freeman details the lengthy incident list above.

There was also a gunfire incident in Oakland connected to a fireworks show following an A’s game at the Coliseum. Guns being shot off Tuesday during the fireworks, either for celebratory or other purposes, injured four people including an 11-year-old boy.

NBC Bay Area reports that Contra Costa County had it tough too, and “At one point during the [9:00 p.m.] hour, the agency was fighting nine simultaneous fires.” That county’s fire department assesses that they responded to 55 fires over the course of the night.

Thankfully none of these fires exploded into large conflagrations, and all were under control or extinguished as of Tuesday morning. That was not the case for a fire that broke out Monday in Amador County, named the Electra Fire, which has grown quickly to 3,000 acres in less than 24 hours.