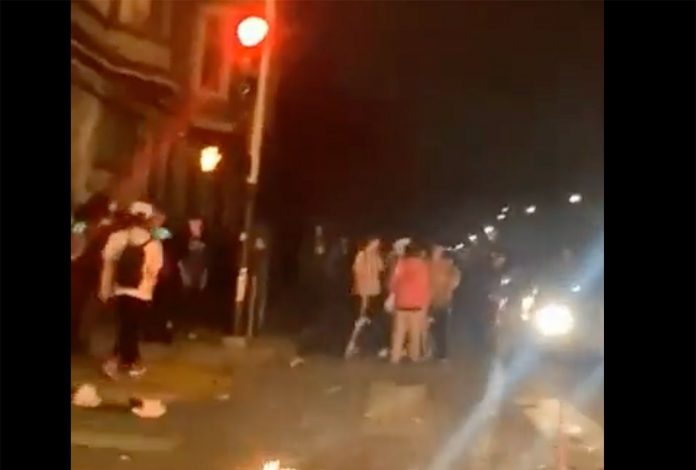 In an echo of an incident reported after the Warriors’ NBA Championship celebrations in the Mission District three weeks ago, the SFPD says that a dozen officers sustained injuries from a hostile crowd shooting off fireworks and continuing to party after midnight Tuesday morning.

The revelry this time was happening at 24th and Harrison streets, and police say they were responding to reports of a large crowd in the intersection around 12:40 a.m. Tuesday. Video from the SFPD’s Mission Station shows a bonfire in the middle of the intersection and people partying and continuing to shoot off fireworks — as many, many people were doing in multiple parts of the city into the wee hours this morning.

“Officers attempted to disperse the hostile crowd. Fireworks and glass bottles were thrown at officers. 12 officers were injured as a result,” the SFPD reported via tweet. “Despite staffing issues, officers eventually were able to clear the crowds from the street and SFFD was able to extinguish the fire before further damage occurred.”

There was no report of any arrests from this incident.

The video the department posted along with this message about the hostile crowd shows only a pretty calm crowd around the perimeter of a bonfire, and no throwing of objects.

Despite staffing issues, officers eventually were able to clear the crowds from the street and SFFD was able to extinguish the fire before further damage occurred. SFPD #220-439-605. @SFFDPIO

Nonetheless, the “riot” did not appear in the department’s crime briefing the next day, and the officers’ injuries were not described, and were not reported at all to the press until the following week, on June 21.

On July 4th, gatherings of people shooting off illegal fireworks in the middle of streets occurred in the Lower Haight, the Fillmore, Chinatown, and elsewhere in the Mission District throughout the night and early morning of Tuesday.

It was, without a doubt, an especially active July 4th celebration, with the San Francisco Fire Department saying they responded to 827 calls — nearly double the calls they get on a typical day — and these included 82 wildland fires. Reportedly, there were two significant injuries from fireworks, one person whose hand was injured, and another who had a firework explode in their face.