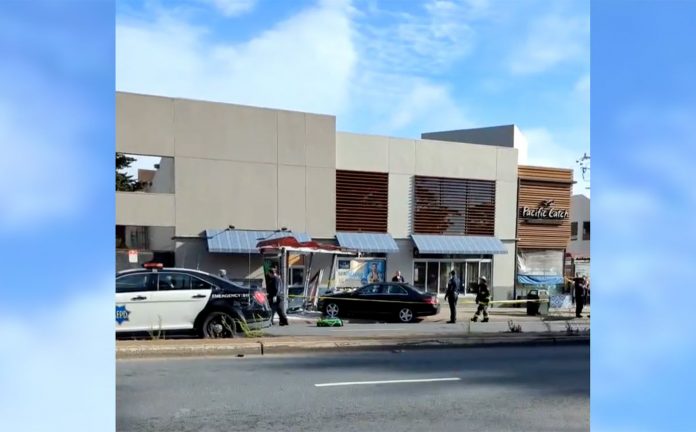 A car crash at the intersection of 9th Avenue and Lincoln Boulevard in San Francisco on Monday evening sent one vehicle careening into a bus shelter where four people were waiting for a Muni bus.

The crash happened just before 6 p.m. Monday, and SF Supervisor Myrna Melgar reported on Twitter that “A car rammed into another, hitting multiple people waiting at the bus stop.”

Terrible collision reported at 9th Ave and Lincoln. A car rammed into another, hitting multiple people waiting at the bus stop. 4 people in critical condition. Will update. Please be careful out there tonight.

ABC 7 reported that police found three pedestrians with injuries at the scene who were all taken to area hospitals. Melgar said that there were “4 people in critical condition,” and KPIX subsequently reported that four people were injured.

An initial Citizen app report had said that no one was injured.

The SFMTA referred to this as a “Muni-involved collision” in a tweet, but possibly only because the Muni bus shelter was involved — and Muni service had to subsequently be rerouted around the area.

Police confirmed, from an initial investigation, that two cars were involved and one had hit the other from behind, sending it into the bus-stop area. It’s unclear if either of the driver sustained any injuries.

ALERTSF: Avoid the area of 9th and Lincoln Way due to Police Activity. Emergency crews are on scene.