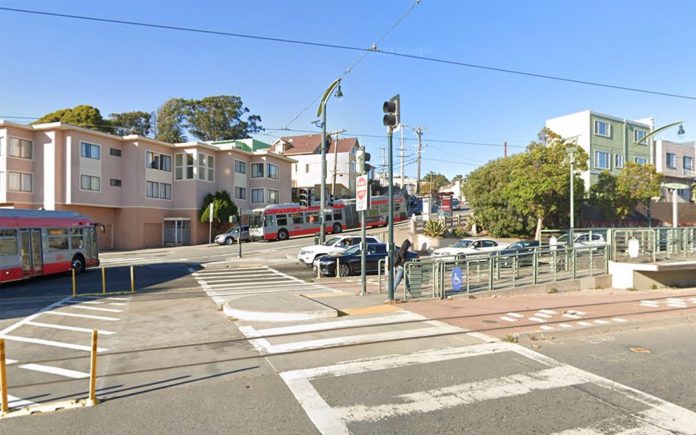 Body Found on Tracks In Visitacion Valley Was Person Struck By Muni Train; Victim May Have Been Dragged

After the SFPD put out the vaguest of vague reports about human remains found on rail tracks on the south side of San Francisco Sunday night, more details are coming to light and the SFMTA is admitting that this person was hit by a T-Third train.

The first reports only suggested that a man’s body was found on or near some tracks, without specifying the Muni light-rail, and no other details were given. The police were reportedly called to the area of Bayshore Boulevard and Arleta Avenue in Visitacion Valley at 10:12 p.m. Sunday, but the accident apparently occurred closer to 9 p.m.

The SFMTA did not confirm a train’s involvement in the death until late Monday, and details are still few.

As ABC 7 reports, multiple agencies are now investigating the collision, including the California Public Utilities Commission (CPUC), and it appears the victim may have been dragged some distance before the train stopped.

Police were reportedly called to the scene by Muni personnel, even though that was not part of the SFPD’s initial public statement, for some reason.

“The medical examiner is conducting their investigation in this incident. Our traffic collision investigative unit also responded to the scene and are currently investigating how this may have occurred,” said SFPD Media Relations Officer Robert Rueca, speaking to ABC 7.

Rueca also said that the “scene spanned for several hundred feet,” indicating some distance that the train traveled after the collision, but, he said, “that’s not necessarily the area that the victim may have been dragged.”

The SFMTA put out a statement saying that the CPUC would conduct its own review of the incident, and “will be making recommendations about what, if anything, could prevent a collision like this from happening again.”

The Chronicle describes the male victim as a “pedestrian,” but no further details about the victim’s identity has been revealed.

“We send our deepest condolences to the family and friends of the person struck on Sunday,” said SFMTA spokesperson Erica Kato in a statement on behalf of the agency.