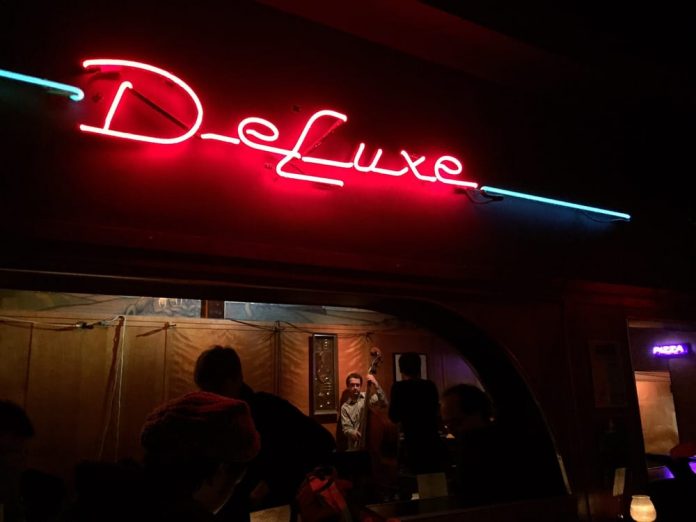 Club Deluxe Is Staying Open After All, and Will Remain at Its Same Haight Street Location

A “marathon mediation at City Hall” Monday resulted in a deal where Haight Street swing music nightclub Club Deluxe will indeed stay open and in business, at the same Haight and Ashbury Street location where it’s operated for 33 years.

When news broke three weeks ago that Haight Street live music nightclub Club Deluxe was going to close, apparently because of some dispute with the property’s landlord, the district’s supervisor Dean Preston quickly went to Twitter to declare, “We have reached out to the business owner and are exploring whether there’s any path to keeping Club Deluxe at this location.”

And now we have news that will be music to the ears of Club Deluxe fans. Preston’s office put out a statement around 11 a.m. Tuesday morning that after a Monday “marathon mediation at City Hall,” Club Deluxe will remain open at its current location, according to the Chronicle. SFist spoke with Preston shortly after that article’s publication.

“When we learned that Club Deluxe was going to close, we intervened and really have been pushing both the property owner and the club to start lease negotiations that had really fallen apart,” Preston told SFist. “We had a mediation at City Hall yesterday, an all-day mediation really trying to get to a final agreement.”

“By the early evening we had the parts come together in agreement. The club will remain open,” Preston said.

Club Deluxe owner Sarah Wilde noted in the press release that “Your love of this venue has helped the landlord understand it is worth supporting this small business by offering a fair lease. Deluxe will be very happily staying at 1511 Haight St, hopefully for another 33 years!”

The Chronicle’s report notes that the landlord of the space is Veritas Investments (yes, that Veritas Investments). While we don’t have a ton of detail about Veritas and Club Deluxe’s dispute, it seems pretty clear that back rent from periods when the club was closed over COVID-19 restrictions was a significant sticking point.

“We did a law last year to create a presumption that rent for businesses, during the time when they were required to be fully shut down by the COVID health orders, that rent is presumed not to be owed. It’s effectively waived,” Preston explained to SFist. “The back rent for the period of time when a business like a club was totally shut down is effectively off the table.”

“That law was a really important part of being able to hammer out an agreement,” he added.

Legacy Business status does not necessarily protect a venue from closure — it provides some grant money to the businesses and to landlords who extend long-term leases to them. But this freshly announced agreement between the club and its landlord does seem to guarantee Club Deluxe’s survival.

“It is really a one-of-a-kind venue,” Preston said Tuesday. “It really occupies a place in the live music scene in San Francisco.”